WASHINGTON — A Pennsylvania doctor who police say came to D.C.’s Trump hotel with guns, ammunition, cash and survival supplies on Wednesday was released by a federal judge Friday.

Armed with an assault-style weapon and a handgun, Bryan Moles, 43, told an acquaintance that he was driving to see the president and that he had survival supplies, multiple cellphones and enough ammunition to make his car resemble Oklahoma City bomber Timothy McVeigh “on a camping trip,” according to charging documents filed Thursday.

Moles, of Edinboro, Pennsylvania, is charged of unlawful possession and transportation of a firearm. He was not licensed to carry a gun in D.C.

During his federal court appearance Friday, Magistrate Judge Robin Meriweather ordered Moles be released and gave him permission to reside with a friend in Georgia.

There are some stipulations to his release, however. Moles was ordered to surrender his firearms and was ordered to participate in a mental health evaluation and treatment at the VA in Atlanta.

He has to stay out of D.C. unless it is for matters pertaining to the case.

In court, Moles said he supports a wife and two kids and has debts totaling $7,000 a month. Because he is on unpaid suspension as a doctor, he was awarded an attorney. Also, he mentioned he may have child support payments coming.

His next hearing is scheduled for June 22.

WTOP’s Mike Murillo contributed to this report from Washington. 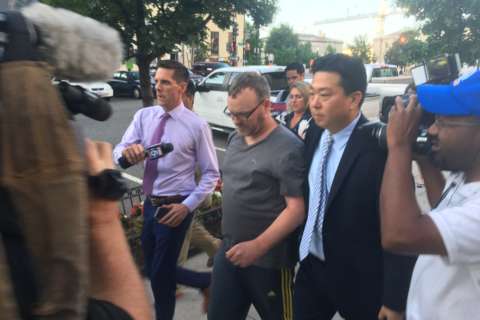