WASHINGTON — With his second birthday coming up this summer, Bei Bei continues to break trees and milestones.

At 150 pounds, the giant panda cub is already 20 pounds heavier than his older brother Tai Shan was when he was Bei Bei’s age, according to the National Zoo. He loves curling up in assorted-sized tubs and spending lots of time in them — even the little ones he has definitely outgrown.

Zoo officials say he’s also an avid climber and, much like his sister Bao Bao, he’s broken some branches along the way.

Bei Bei has also passed a mucous stool — which is not uncommon for giant pandas — and was successfully weaned from his mom Mei Xiang this year. He’s also learning to show zoo keepers different parts of his body as well as open his mouth and lie down. Zoo keepers continue to teach him behavioral skills that will help veterinarians examine him. 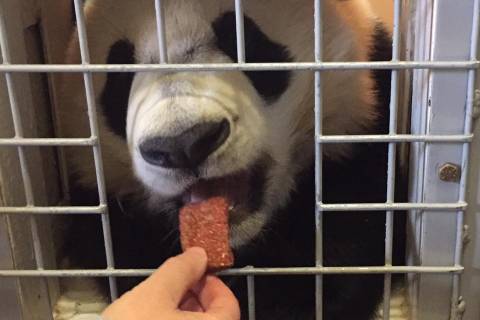