The first of two bald eagle chicks to hatch at the U.S. National Arboretum got its leg stuck in the nest this week, forcing wildlife specialists to stage a rescue. After being checked out by a vet, the eaglet has been returned home.
Listen now to WTOP News WTOP.com | Alexa | Google Home | WTOP App | 103.5 FM

Watch a livestream of the National Arboretum eagle nest on the American Eagle Foundation’s website. Check out a livestream of D.C.’s other famous eagle pair at the D.C. Police Academy on the Earth Conservation Corps’ website.

WASHINGTON — The first of the two bald eagle chicks to hatch at the U.S. National Arboretum this year is having an exciting third week of life, but on Friday evening it’s home in the nest again.

The eaglet, whose name for now is DC4, got its leg hopelessly stuck in nest sticks Thursday. It was rescued and examined by a vet and on Friday was found well enough to be returned home.

In a remarkably cute video made by the American Eagle Foundation, a worker brought the eaglet in a bag up to the nest while its parents, Mr. President and The First Lady, weren’t there. The other eaglet, DC5, was.

The man opened the bag and encouraged DC4 to come out. “Don’t be a chicken,” he said, with a look at the camera.

Then after the eaglet comes out, the man kissed it on the head and said, “You stay away from the edge. Don’t make me come back here.” When a co-worker asked the man to repeat himself, he replied, “I’m talking to the eagle!”

The eaglet’s leg was slightly injured from all the tugging and pulling and twisting that went on for hours before it was rescued about 8 p.m. Thursday.

“A radiograph was done on its leg and the leg looked in good shape,” said Al Cecere, president and founder of the American Eagle Foundation. “We feel whatever healing it needs to do, whether it’s the swelling or the abrasion, it could be done just as easily in the nest as in a cage someplace.”

Wildlife specialists typically prefer not to intervene, but the decision to act to rescue the bird was made in conjunction with the U.S. Fish and Wildlife Service. 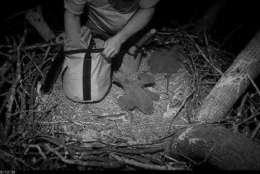 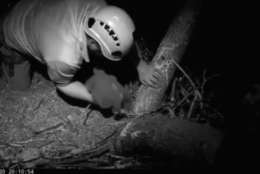 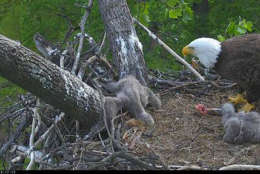 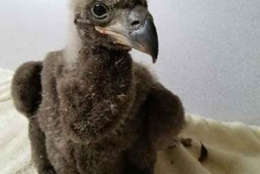 “It’s a good ending to a potentially terrible story, but we’re very hopeful for the eaglet,” Cecere said.

Cecere said the young bird smelling like humans will have zero impact on how it’s received upon return to its family.

“That’s not true; that’s an old wives’ tale that’s been around for many generations,” Cecere said of theories the bird would be rejected.

With the exception of some vultures, Cecere said most birds have a very poor sense of smell.

“I’ve personally taken out and put eaglets in nests many, many, many times and I’ve never had a problem with the parents accepting the baby,” Cecere said. The same would be true of even a backyard robin or sparrow.

“If the nest is within reach, you could put the baby back in the nest with your hands,” he said. 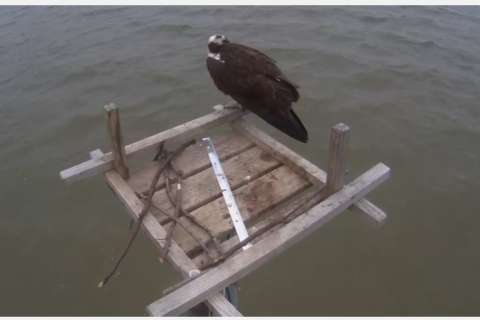 Eaglets more likely to get along at feeding time 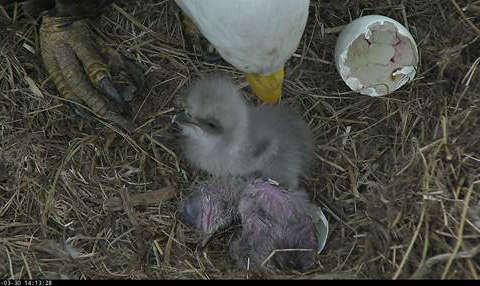