In recognition of 4/20, a date celebrated by many marijuana enthusiasts, pot advocates in D.C. are planning demonstrations around the U.S. Capitol building, including one that could land participants in jail.
Listen now to WTOP News WTOP.com | Alexa | Google Home | WTOP App | 103.5 FM

WASHINGTON — In recognition of 4/20, a date celebrated by many marijuana enthusiasts, pot advocates in D.C. are planning demonstrations around the U.S. Capitol building, including one that could land participants in jail.

“Giving adults access to cannabis and individuals and small business owners legal protection in all 50 states is what the American people have been asking for, said Adam Eidinger, co-founder of the advocacy group DCMJ. “We’ll celebrate adults making informed choices.”

Eidinger’s group has a demonstration set for Thursday in Northeast near the U.S. Capitol at the corner of 1st Street and Constitution Avenue. The group plans to hand out 1,000 marijuana joints throughout the afternoon.

The event will be on a city street, where it is legal to possess the joints. 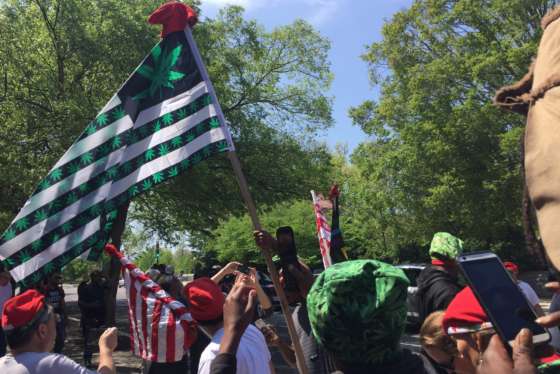 A gallery of photos and video from pot-centered 4/20 events.

Then, in a few days, the group has a more provocative protest scheduled, pushing for Congress to loosen marijuana laws and regulations.

DCMJ is rounding up activists for an event on Monday directly outside the U.S. Capitol on the east side of the building. They plan to smoke marijuana at that location, on federal land, where using and possessing marijuana is a crime.

The group calls the event a show of “mass civil disobedience” and says that it expects “arrests to take place.”

“It would be a grave mistake to ignore the will of the American people,” said Nikolas Schiller, another co-founder of DCMJ.

“The number of cannabis reform bills before the 115th Congress is at an all time high, but the lack of Congressional action is no laughing matter … A federal solution is needed now.”

Rules regarding the use of marijuana for recreational purposes vary throughout the region. In the District, it is legal to grow and smoke marijuana, but selling it is not allowed. Recreational pot remains against the law in Virginia and Maryland, although possessing small amounts of it in Maryland can result in a civil fine rather than a criminal charge.