Crashes with injuries on the rise, fatal wrecks down in DC

Crashes and injuries are on the rise in the District, but the number of fatal collisions has dropped slightly, according to a review of D.C. traffic crash data.
Listen now to WTOP News WTOP.com | Alexa | Google Home | WTOP App | 103.5 FM

WASHINGTON — Crashes involving injuries have been on the rise in the District in recent years, but the number of fatal collisions has dropped, according to a report compiled by the Howard University Transportation Research and Data Center.

The report, which was completed for the District Department of Transportation, details crash information over a three-year period stretching from the start of 2013 through 2015.

More than 65,000 crashes in the District were reported during that time. And each year, the numbers were progressively higher, according to the data.

“Things are bad when you look at the sheer number of crashes every year. But the number of fatalities continues to drop, and that’s what’s of paramount importance,” said John Townsend, AAA Mid-Atlantic spokesman.

Another drop in the data occurred with crashes involving bicyclists. In 2013, there were 652 such crashes, and 863 in 2014. However, in 2015, those crashes went down to 679, marking a decrease from the previous year of more than 21 percent.

The opposite happened with crashes involving pedestrians being struck, which spiked by nearly 20 percent between 2013 and 2015. They went from 1,038 in 2013 to 1,258 in 2014 and stayed basically unchanged the following year.

Thousands of drivers from around the D.C. region were involved in crashes in the city, but D.C. residents stood out in the data.

“The (local) drivers most likely to be involved in a crash live in the District of Columbia,” Townsend said.

In 2015 – the last year the study covers,  Mayor Muriel Bowser announced her Vision Zero initiative, which aims to bring the  number of fatal traffic crashes in the District to zero by 2024. Pedestrian fatalities down in DC, Md., but up in Virginia 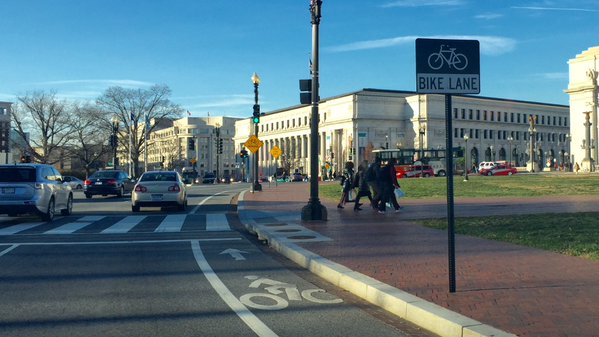