D.C.'s beloved cherry blossoms are in danger from the weekend blast of cold, but there's hope that the waters of the Tidal Basin might provide a bit of a thermal blanket to protect the delicate buds.
Listen now to WTOP News WTOP.com | Alexa | Google Home | WTOP App | 103.5 FM

WASHINGTON — D.C.’s beloved cherry blossoms are in deep danger from the weekend blast of arctic air, but there’s hope that the waters of the Tidal Basin might provide a bit of a thermal blanket to protect the delicate buds.

“The magic temperature seems to be about 27 degrees,” said Mike Litterst, National Park Service spokesman. “Anything below 27 degrees [and] we can likely look for some damage to some of the blossoms. The colder the temperatures get, of course, the more widespread that damage could be.”

The mercury dropped into the danger zone for the blossoms early Saturday morning, reaching 26 degrees for about an hour in D.C., Litterst said. The temperature is forecast to fall into the 20s again early Sunday morning.

But the Tidal Basin may spare the blossoms by acting as a thermal blanket to the trees. Many of the trees are located near the water’s edge, and air temperatures can be a little warmer near open bodies of water.

February’s unseasonably warm temperatures helped pushed the cherry blossoms into the late stages of blooming when the buds are most vulnerable.

“There are six stages the trees go through before they’re at full bloom,” Litterst said. “The earlier the stage, the better protected the blossoms are. The concern right now is that three-fourths of the trees or so are at the later stages, and there’s less protection for the blossoms.”

The possibility of snow Monday into Tuesday poses another risk, but only if the snow is heavy on the branches, enough to bring the blossoms down.

“The cold is the greater concern,” Litterst said.

“If we have fewer blossoms than normal, we’ve still got three weeks of fun and festivities coming up to welcome spring back to the Nation’s Capital,” Litterst said. 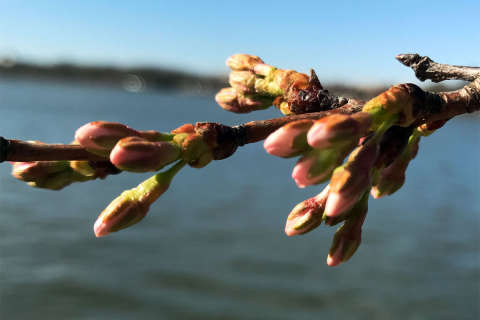