WASHINGTON — After delighting National Zoo visitors for three years, giant panda Bao Bao has departed for her new home in China where conservationists hope she will eventually find a mate and have a cub of her own one day.

Bao Bao left Dulles International Airport just before 2 p.m. aboard a FedEx cargo plane decorated with an image of a panda munching on bamboo. She’ll touch down in Chengdu on Wednesday and will begin a 30-day quarantine.

The panda, whose name means “precious” or “treasure,” was given a send-off worthy of royalty.

A crowd of reporters, photographers and camera crews captured her grand exit tracking every move from her morning snacks at the zoo, to her 800-pound steel travel crate being hoisted into the belly of the plane on the tarmac.

A police escort accompanied the panda as she traveled by truck to the airport.

The president of FedEx attended a ceremony at the airport along with a Chinese government official from the embassy in D.C. China’s ambassador to the United States joined a ceremony earlier at the zoo.

“Today marks another milestone in our race to save giant pandas from extinction. Every birth is so important,” Kelly said.

He hopes that she’ll find a mate in China and that her descendants will one day be returned to the wild.

Bao Bao was the second surviving cub born to parents Mei Xiang and Tian Tian at the zoo and represented years of work by zoo staff, who were emotional as they said goodbye at the panda exhibit Tuesday morning. Mei Xiang has given birth to two other surviving cubs: Tai Shan returned to China in 2010 and Bei Bei remains at the zoo.

“It’s bittersweet,” said animal keeper Shellie Pick. “Watching her grow up has been the treat of my career. It’s sad to see her go.”

The keepers walked slowly along side the travel crate as it was pulled away by a forklift at the zoo.

One of her keepers and a zoo veterinarian will travel to China and stay with her for several days to make sure she settles in. They packed a load of snacks for Bao Bao to eat during the flight. 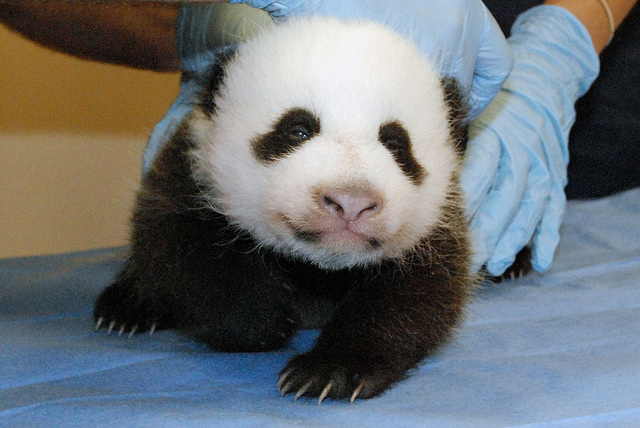