A firefighter with special training to care for animals helped out when the dog, Cesare, was pulled from the Northwest home unconscious. The big white dog was revived and taken to an animal hospital. See video of the resuscitation efforts.
Listen now to WTOP News WTOP.com | Alexa | Google Home | WTOP App | 103.5 FM
(1/2) 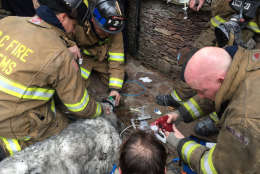 WASHINGTON — D.C. firefighters are hoping that the dog they pulled from a smoky kitchen fire in Northwest D.C. will survive.

Vito Maggiolo, the spokesman for DC Fire/EMS said when firefighters arrived at a Klingle Street home in Northwest D.C. Monday afternoon, they found the family’s big, white dog unconscious. “We rushed him out to the backyard and began resuscitation efforts”, said Maggiolo.

No one was home at the time of the fire, and once the blaze was out, emergency workers focused on the family dog, Cesare, a Maremma breed.

The dog had been exposed to a lot of heavy smoke in a short time. Gene Ryan, a firefighter and paramedic, explains he’s a K-9 handler: He has a “disaster dog” and had undergone special training to care for animals. He grabbed a medical kit off one of the trucks responding to the fire. “Here in the District of Columbia we carry a Cyanokit, it reverses the effects of carbon dioxide poisoning. We use it on humans and dogs” Ryan said.

The dog was intubated and given fluids, and Ryan said soon he was kicking and blinking, good signs. D.C. police working with the fire crew transported the dog to Friendship Hospital for Animals in Tenleytown. The dog was undergoing oxygen therapy and was in critical condition according to Maggiolo, who got a briefing from veterinarians there.

The dog’s owner Peter Garrett thanked the firefighters in a tweet.

Thank you @dcfireems for saving our Cesare, we are hoping he’ll pull through thanks to your heroic efforts today at our fire-stricken house pic.twitter.com/llLxr9oQ44

Maggiolo said that while the first priority on any call is putting out fires and getting all the occupants out of a home, animals are taken into account. “A lot of people have pets — people care for their pets. So we try to treat their pets with as much care as we would a citizen,” Maggiolo said.

The cause of the fire is still under investigation.