WASHINGTON — When D.C. voters head to the polls Tuesday, they’ll have the chance to weigh in on a push by city leaders to gain statehood status for the District.

Even if the ballot referendum passes — as expected— the long-shot effort to make D.C. the 51st state remains far from a done deal.

But D.C. Mayor Muriel Bowser says giving voters the opportunity to approve a proposed constitution and boundaries is an essential part of the statehood strategy — and the timing may be just right, she says.

“We wanted to have our house in order in D.C. and work with a new president and a new Congress to finally get an admissions act for D.C. passed in the Congress,” Bowser told WTOP on the eve of the election.

Despite the advantage of “like-thinking people in the White House and the Congress,” in early 2009, the District lacked an up-to-date voter-approved Constitution, and a statehood effort fizzled. At the time, the most recent constitution OK’d by the voters dated back to a previous statehood push in the early 1980s.

“And one reason why we pushed so hard this year to have a new constitution and a new vote is because we never want to be in that position again,” Bowser said.

As for pitching statehood to Congress, Bowser said she stresses that D.C. statehood doesn’t have to be a partisan issue.

“Taxpaying Americans in Washington, D.C. are no different than anybody in Maryland and Virginia or any of the other 50 states except we don’t have single vote in Congress,” Bowser said. “Our congresswoman doesn’t vote and we don’t have any senators to speak up for us — and that has to change.”

The polls open in D.C. Tuesday at 7 a.m. and stay open until 8 p.m. More than 101,000 D.C. residents cast ballots during early voting, which Bowser referred to as a “historic turnout” for pre-Election Day voting in the District. That’s 20 percent of all registered voters in D.C. and 40 percent higher than the number of voters who cast an early ballot in 2012, according to the D.C. Board of Elections.

In addition to the statehood referendum, voters will also decide whether to return former Mayor Vincent Gray — whom Bowser defeated in the 2014 Democratic mayoral primary campaign — to the D.C. Council.

Gray, who defeated Bowser ally Yvette Alexander in the June primary race, is expected to win back his old Ward 7 council seat.

Bowser said she is prepared to work with new members of the council, who generally share her priorities, such as affordable housing, improving schools and boosting economic development, she said.

“I look forward to working with all of the members of the council on their priorities, on the priorities of our administration, which really reflect what the residents of the District of Columbia want,” she said. 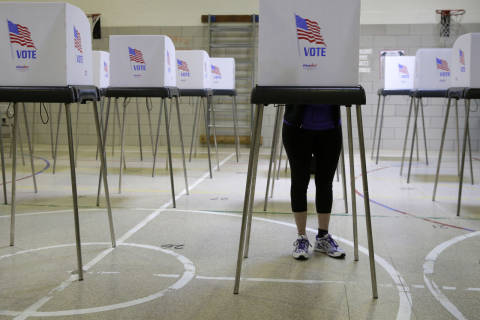