Italian workers will soon begin to tile the mosaic of the Trinity Dome at D.C.'s Basilica of the National Shrine of the Immaculate Conception. Ahead of their arrival, the project at the nation's largest Catholic church received its blessing.
Listen now to WTOP News WTOP.com | Alexa | Google Home | WTOP App | 103.5 FM
(1/7) 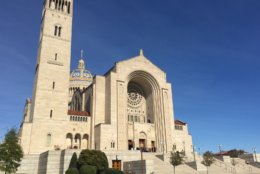 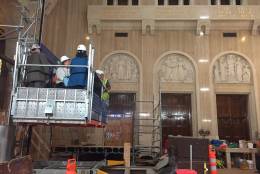 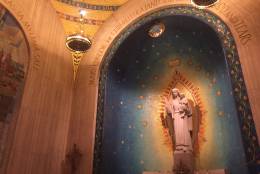 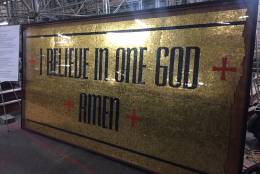 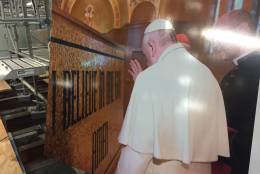 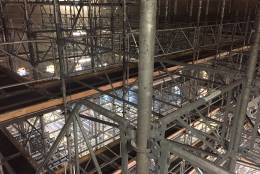 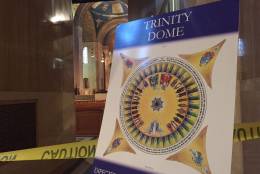 WASHINGTON — Italian workers will soon begin to tile the mosaic of the Trinity Dome at D.C.’s Basilica of the National Shrine of the Immaculate Conception. Ahead of their arrival, the project at the nation’s largest Catholic church received its blessing.

Up two construction elevators, three flights of scaffolding stairs and 16 floors above the pews of the basilica, the Archbishop of Washington Donald Cardinal Weurl blessed the Trinity Dome, its workers, scaffolding and artisans.

Work begins in January on one of the largest mosaic installations in the world.

“There are 14 million pieces of Venetian glass that will make up this mosaic. That’s 24 tons that will be affixed to this dome. Even the scaffolding is an engineering feat. It’s done so it’s suspended rather than anchored from the floor,” said Jackie Hayes with the Basilica.

The Trinity Dome — in the nation’s largest Catholic church — is five times larger than any other in the basilica and it’s the final uncompleted phase of a plan written for the house of worship that’s foundation stone dates back to 1920.

“Pope Francis, when he was here on Sept. 23 last year, blessed the preliminary piece of mosaic that was fabricated for this dome and it’s the beginning and end of the Nicene Creed, which says, ‘I believe in one God. Amen,'” Hayes said.

The Italian artisans flying to Washington with the mosaic tile work 15 years tiling before they are permitted to work on the intricate faces of the deity’s and saints depicted in the Trinity Dome.

“It’s going to be the Holy Trinity, the Blessed Virgin Mary and procession of saints, including the 13 saints of the United States saints as well as saints who had history with shrine, for example Pope John Paul II and Mother Teresa of Calcutta,” said Monseigneur Walter Rossi, director of the national shrine.

Editor’s note: This story has been updated to reflect the Basilica of the National Shrine of the Immaculate Conception is the nation’s largest Catholic church.