A man was shot in the face inside the McDonald’s next to the Verizon Center in the District on Friday afternoon.
Listen now to WTOP News WTOP.com | Alexa | Google Home | WTOP App | 103.5 FM
(1/4) 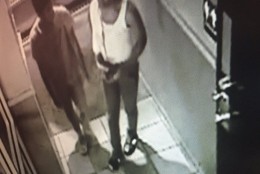 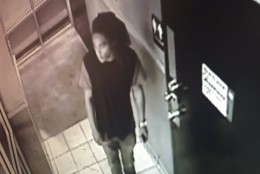 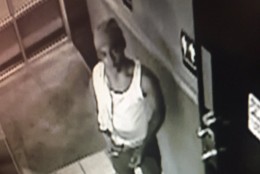 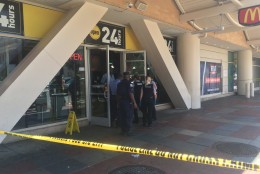 WASHINGTON – A man was shot in the face inside the McDonald’s next to the Verizon Center in the District on Friday morning.

The shooting happened in a bathroom in the restaurant on F Street Northwest just before noon. The D.C. police say that a man was shot in the face but has non-life-threatening injuries. They say they have three people of interest in the shooting, and add that the victim probably knew the suspects.

The McDonald’s was packed, with a lunch-hour crowd, when the man emerged from the bathroom after having been shot in the face.

Charrone Dozier, of D.C., said he at first tried to help the injured man while many others in the restaurant dropped their lunches, and jumped up.

“Everybody kind of backed up and got scared; one dude even jumped on the counter and moved away,” Dozier said.

D.C. police say that when they got to the scene,  another good Samaritan was helping the wounded man, by using his shirt to help stop the bleeding.

Police don’t believe this is a random act and are looking for 3 suspects in the case.

“We have determined that the victim did know at least one of the suspects,” said Robert Alder, with the D.C. police.

Alder said the man was seen having a conversation with the suspects before the shooting occurred.

The restaurant was closed after the shooting, and abandoned food bags and drinks remained on the tables inside, as investigators examined the scene.

The injured man is in the hospital in stable condition.