WASHINGTON — D.C. is now operating two separate 911 centers after a power outage caused by human error left the nation’s capital without any emergency phone service for almost an hour on a busy weekend night.

“Unfortunately because it was human error we weren’t prepared for it,” Holmes said.

Officials estimate that as many as 300 to 350 calls to 911 did not go through during the 1.5-hourlong service disruption, which began about 11:35 p.m. Saturday.

“We haven’t had any major incidents that were not handled, thank God,” Holmes said.

But to prevent another disruption to the District’s emergency call service, Holmes has staffed and operated both the backup site and the main communications center at the St. Elizabeth’s Hospital campus since the outage.

And she wants to make to make the dual 911 centers permanent.

“So in the case it happens again we don’t lose minutes,” she said.

Most states have multiple 911 call centers so if one goes down for any reason, another community or jurisdiction can pick up those calls and direct police or ambulances to where they are needed. That’s not the case in D.C., Holmes said.

“In the case of the District, we are our own backup.”

When the power was cut late Saturday, staff working in the 911 call center were sent to the District’s backup site at McMillan Drive NW. But a call routing system, which is supposed to automatically redirect 911 calls to the backup center, also had no power, and no calls came through until 12:25 a.m. Sunday, when only some calls trickled in, Holmes said.

The backup center was fully operational about 1:15 a.m., she said.

District technology staff are trying to figure out why the call-router also lost power and how to improve that critical backstop, Holmes said.

Meanwhile, the District is also looking into the maintenance contractor that sent in the systems engineer who pulled the emergency power shut off switch. The engineer is no longer allowed into District buildings, Holmes said.

The engineer was trying to silence a water leak alarm, Holmes said.

That emergency shut off switch was clearly labeled, said Alan Etter, spokesman for the Office of Unified Communications.

Power supplied to the building that houses the communication center was never lost, officials said.

The office wants to hear from anyone who attempted to call 911 on Saturday night or early Sunday morning but were unable to get through to a call taker. They can call the District’s nonemergency 311 number to report their experience and how it affected them. 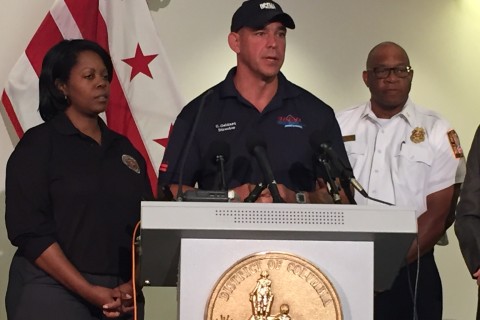