D.C. woman given unique award for service in Iraq 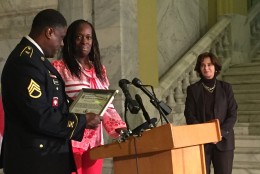 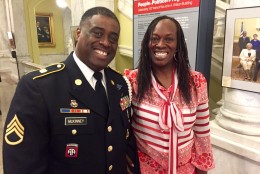 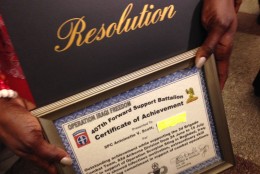 WASHINGTON — As tourists buzz down Pennsylvania Avenue, inside City Hall, a local woman received an honor never awarded before in the District.

The recognition comes 13 years after the Dunbar High School graduate, veteran, mother and now-grandmother was injured in an IED attack while serving in Iraq.

Serving in the 547th Transportation Unit, Scott was driving a five-ton vehicle, transporting soldiers to the Baghdad International Airport during Operation Iraqi Freedom, when they were hit.

“I didn’t realize what happened,” Scott recalled. “I just knew [something] was forcing me to fight to keep the vehicle on the road. My only thought was, ‘I have to make sure everyone is safe.’ It took a few minutes, maybe 10 or 12 minutes before i realized I was injured.”

She says she had extensive injuries to her face and head: a broken jaw, a large wound in her cheek and head trauma. No one died in the attack.

“Everyday we left those gates, we never knew if we were going to make it back. One of us did not,” Scott said of her friend Spc. Darrell Dent. “When you think about it, I’m here, and I can stand here and tell my story. He can’t.”

Scott says she is humbled. Her family and friends watched her receive the honor.

“I never expected that it would come this soon,” she said. “Some people don’t get recognized ’til they’re dead and gone, and so I appreciate this.”