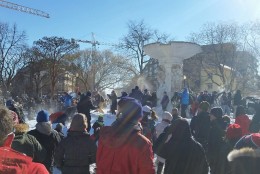 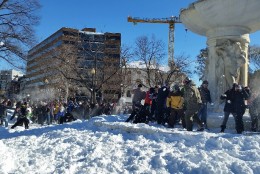 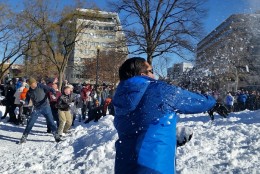 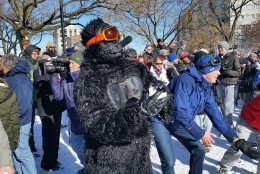 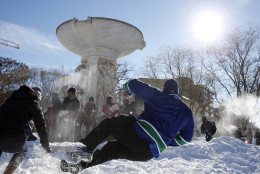 WASHINGTON — After days of epic snow, 200 hundred people gathered at Dupont Circle on Sunday morning for Snow Wars: The Snowball Strikes Back.

Rachel Kliger was taking out the enemy left and right and wasn’t feeling too bad about it, either. “I think everyone is hitting everyone so all is far in snow and war,” said Kliger, who is from Miami.

Marlana Kain, who lives nearby, stood on a bench to get a good view of the chaos and flying snow.

“This one’s epic,” Kain said. “The snow is beautiful and no one’s lost their power. It’s joyous. It’s fun. There’s people from everywhere, dogs and kids.”

In the midst of the chaos was Jamik Patel and his band of snowball fighters, who ran yelling and screaming as they charged to capture the fountain, which stands in the middle of Dupont Circle.

After taking heavy fire from all sides they were able to claim victory.

“We got to plant the flag in the fountain,” said Patel, as he held a large American flag.

Despite the chaos, Lipin said there are rules.

In spite of the Snow Wars theme, a guy dress in a gorilla suit took part in the snow battle.

“The zoo, the snow was so high I could climb right over the walls,” the man said. “I ran all the way from Woodley Park.” And he laughs.