WASHINGTON — The race is on to see who will become the next group of “Racing Presidents.” Well actually, we might…
Listen now to WTOP News WTOP.com | Alexa | Google Home | WTOP App | 103.5 FM
(1/4) 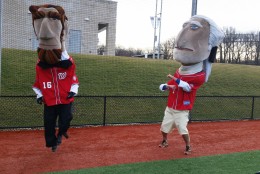 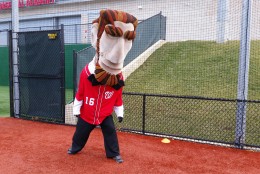 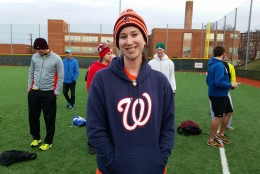 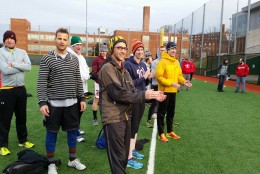 WASHINGTON — The race is on to see who will become the next group of “Racing Presidents.” Well actually, we might never know who they are, but the annual Nationals auditions to pick the presidents got under way Saturday morning.

But it seems “Racing Presidents” Bill and Teddy are not being replaced. “I think Teddy and Bill are good for the 2015 season,” says Tom Davis, Washington National Senior Manager of Entertainment.

This is the first year the tryouts were not held at Nats stadium; instead, they were held at the Washington Nationals Youth Baseball Academy in Southeast, D.C., which opened in March 2014.

Davis says of the 250 people who applied, only 32 individuals were invited to audition to become the next George, Tom and Abe.

Those who were auditioning suited up as George, Tom or Abe and first ran a 40-yard dash, then ran a President race (the three presidents running against each other), then did some freestyle dancing and were asked to strike a victory pose. Finally, they went before a panel to answer questions.  Davis says, “Personality also plays a big role in who they choose.”

However, they’re only allowed to give their first names when talking to the press. Twenty-nine-year-old Matthew from D.C. says he’s been a mascot for a short time in Minnesota, but says this is totally different.

“There’s 45 lbs dangling above your head,” Matthew says. “You just have to control and nothing can prepare you for it.” He was dressed in the George Washington costume and George seemed to be pulling up the rear in the first three heats of the morning.

Regardless, he says, it was a great experience. “I’m thrilled I got the opportunity to do this with the Nats. A lot of fun and all these people — the other competitors — cheering you on. And everybody just got really excited to be here and give it a shot.”

The only female out of the 32 competitors was Erin from Woodbridge.  She had a unique way of preparing for the tryouts, since the Racing Presidents costumes weigh about 45-50 pounds and are extremely top heavy.

“I literally put my four-year-old on my shoulders this week, and after I finished with him running around,” she says. “Then I worked up to my seven-year-old and ran around with her a little bit.”

Davis says they’ll pick the best of the best, which is usually around 15-20 contestants. But the public won’t know who was picked to be the next George, Tom and Abe.

“You’ll probably never know,” Davis says. “But I will hopefully know by the end of next week.”