A big payment to the consortium building the Purple Line has been approved, though Md.'s top transportation official insists the deal will save taxpayers money in the long run.
Listen now to WTOP News WTOP.com | Alexa | Google Home | WTOP App | 103.5 FM

Maryland’s Board of Public Works approved a hefty payment to the consortium building the Purple Line on Wednesday, though the state’s top transportation official insisted the payout — in tandem with a new contract modification — will save taxpayers money in the long run.

The funding will allow Purple Line Transit Partners (PLTP) to pay off early the $313 million in “private activity bonds” that the consortium floated in 2016 to launch the project.

When completed, the 16-mile line will connect the inner-suburbs of Montgomery and Prince George’s, with several stops near the University of Maryland College Park.

The rail line suffered a major setback last summer when PLTP’s prime subcontractor, Purple Line Transit Constructors (PLTC), successfully sued to pull out of the project following a lengthy dispute with the state over cost-overruns.

The Maryland Department of Transportation and PLTP have been working to find a replacement ever since, with the state taking over day-to-day oversight of more than 150 subcontractors who have remained on the job.

Transportation Secretary Greg Slater told the board that paying off the bonds early would allow his agency and PLTP to select a new prime subcontractor without needing Wall Street’s approval.

“The bondholders themselves have had certain rights and approvals and protections involving the project,” he said. “Paying off those existing bonds essentially removes the bondholders from the … contractor selection process.”

“Today the banks have final sign-off on the builder that we select,” Slater added. “Our interest is in the best long-term success of the project — and that doesn’t always align with the bondholders.”

The three-member board — made up of Lt. Gov. Boyd K. Rutherford (R), Treasurer Nancy K. Kopp (D) and Comptroller Peter V.R. Franchot (D) — unanimously approved as much as $375 million for the bonds to be repaid early.

Gov. Lawrence J. Hogan Jr. (R) — who typically chairs the board, but was absent Wednesday to attend a small business roundtable in Baltimore — has called the Purple Line the largest transit project to be built through a public-private partnership in U.S. history. The General Assembly approved “P3” legislation in 2013.

“This shows the hidden pitfalls of the P3,” said Ben Ross, chairman of the Maryland Transit Opportunities Coalition. “The fact that the lenders were able to obstruct the new construction contract is a consequence of the fact that this is a P3.”

Slater stressed that the funding sought by the agency represented “advance payment for work already completed,” not a swelling of the project’s overall price tag.

Although MDOT will use funds from the Transportation Trust Fund, the secretary said no other projects would be delayed, due to a rebound in revenues.

There are four series of bonds. The state will incur prepayment penalty of approximately $35 million for paying off one of the four early. Over the long term, however, MDOT expects to save money due to lower interest payments.

Approximately $1 billion worth of design and construction work has been completed to date, Slater told the board.

He said crews are currently moving overhead and underground utilities, constructing an overpass and digging a tunnel. Nearly half the Purple Line’s rail cars have been built and are undergoing testing in New York; the other half are partially complete.

When PLTC left the project last fall, communities in Prince George’s and Montgomery were pockmarked by construction.

Political leaders and Purple Line supporters were concerned that it would be difficult to find a company willing to take the risks associated with finishing a complicated, half-completed project.

In March, PLTP announced that three firms had been chosen to compete on the project, Halmar International, Maryland Transit Solutions (comprised of Dragados USA and OHL USA), and Tutor-Perini/Lunda.

The consortium and MDOT said at the time they hoped to select a replacement in June, with a contract signed by September.

Now, bids are expected in late September, with hopes of selecting a new contractor by the end of the year and a deal in place by mid-February. That would allow full-scale construction to resume by spring.

Slater said the three bidders have submitted approximately 550 questions about the status of the half-built transit line.

“The proposer teams have requested, across the board, some additional time to look at the remaining work, how it ties in with the existing work, dig into the designs, and we’ve granted them that time,” he said.

“It was very clear to us — and what they communicated to us — is that more time in that due diligence will get us a better value on the bid at the end.”

The Purple Line is reportedly more than two years behind schedule.

The near-collapse of the project last year is a sensitive one for the Hogan administration.

The dollar amount of the bond-repayment item was not listed on the Board of Public Works agenda when it was first posted to the web. The agency updated the post to include the up-to-$375 million price tag on Tuesday. 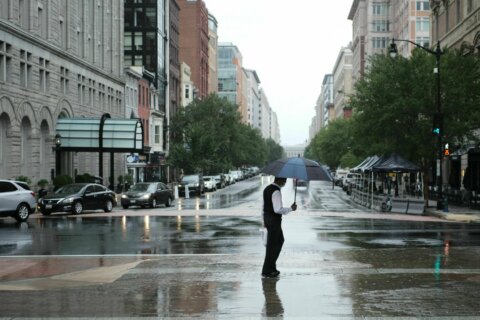 25% of all critical infrastructure in the US is at risk of failure due to flooding, new report finds