The research into the monorail idea was released after officials in the D.C. region criticized Maryland's plan to add high-occupancy toll lanes toll lanes to parts of the Capital Beltway and I-270.
Listen now to WTOP News WTOP.com | Alexa | Google Home | WTOP App | 103.5 FM

While Maryland works on plans to add toll lanes to Interstate 270 and the Capital Beltway, transportation leaders are studying the more unconventional plan of potentially building a monorail to help ease traffic along I-270 as well.

The line would include six stations between Frederick and the Shady Grove Metro stop.

“Assuming an aggressive design and construction schedule, the earliest that the construction can be complete is within five years,” according to a new study from the state’s transportation department.

It would cost more than $4 billion to build.

Currently, it is not clear how Maryland would pay for it.

The study said the monorail would be “viable as a transit system” but would have “very little impact on existing road networks.”

“The more conservative of the ridership forecast range represents approximately 10,000 additional regional transit trips, or a reduction of auto vehicle trips in the region of 10,300, which is less than 1% of the overall single vehicle trips,” according to the study.

There are 57 monorail systems currently operating around the world, eight of which are in the U.S.

“Success in the I-270 corridor would require a behavioral shift from single-occupancy vehicle travelers to mass transit commuters, and greater land use densities at stations,” the study said.

The research into the monorail idea was released after officials in the D.C. region criticized Maryland’s plan to add high-occupancy toll lanes toll lanes to parts of the Capital Beltway and I-270.

Leaders with the Maryland-National Capital Park and Planning Commission said the state’s plan “failed to divert enough cars off the road through increased transit.”

“We are extremely disappointed in the state’s ‘preferred alternative’ for adding lanes to these highways while offering nothing to reduce the need for more cars,” said the commission’s chairwoman Elizabeth Hewlett.

Some area business groups and AAA Mid-Atlantic previously announced that they support plan, saying it will reduce congestion by 34% over 20 years, saving drivers 72 hours every year behind the wheel.

VDOT wants your thoughts on improvements at I-95 and Va. 123 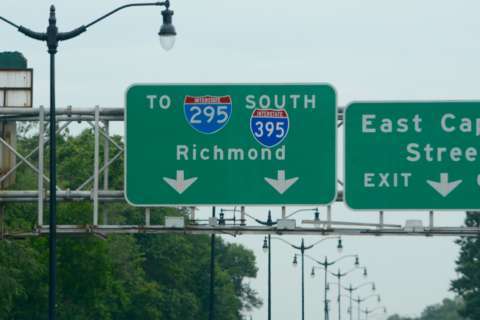