Negotiations resume over contracts for hundreds of Northern Virginia bus drivers and other workers, but another negotiation could have a broader impact.

With thousands of commuters stranded for six weeks, and tens of thousands more people in Fairfax County on edge about losing their rides, negotiations resume Wednesday over contracts for hundreds of Northern Virginia bus drivers and other workers.

Metrobus drivers at the Cinder Bed Road garage in Lorton have been on strike since Oct. 24 against Transdev, the private company that runs service at the garage for Metro.

A separate transit union contract with Transdev for Fairfax Connector operations expired Sunday, and workers on those routes are threatening a strike by the end of the week.

Union officials and Transdev are set to sit down Wednesday and Thursday for the latest negotiations on both contracts.

The routes that run out of Cinder Bed Road serve several thousand people each day, mainly in Fairfax County.

There are also questions about whether Metrobus service could be affected on routes that are based at garage locations shared by Fairfax Connector and Metro.

The union has been extremely vocal during the Cinder Bed Road strike in its complaints about private companies operating transit systems, pay disparities between transit workers at different agencies in the region, and other concerns. But Transdev had largely limited its public response to brief statements until now.

Transdev regional Vice President John King spoke to WTOP on Tuesday about the status of negotiations and the company’s plans going forward.

King apologized to riders who have had no service or, at best, significantly reduced service for the last six weeks.

“I’m disappointed, and I apologize that they’re caught up in this matter. Our employees are free to come back to work at Cinder Bed Road at any point in time,” King said.

“This is an initial contract. This is the first CBA [collective bargaining agreement] that’s being negotiated with the parties. It’s taking longer than I think either group would like, but there’s a lot of things to consider into the future,” King said.

He urged workers to simply leave the picket line and return to work as negotiations continue.

“That decision is not for me– it’s for them to make. So I’m hoping that we can continue to bargain in good faith and have everyone come back to work and restore the bus service that the community needs,” King said.

Contract negotiations began in January for the Cinder Bed Road garage. Workers have been paid a starting wage similar to the starting salary for direct Metro employees, King said, even if benefits are different.

“There’s a disparity there, but it’s not a year-one disparity, so I think that’s important to know,” King said.

He accused the union of distorting facts to support its public positions, but said negotiations are proceeding in good faith from both sides.

Negotiations now include a federal mediator.

“We continue to bargain in good faith there, and we would like to get a deal done. And we believe that that’s reachable. When you move over to the Fairfax Connector, we believe the same thing,” King said.

On Tuesday, the union posted on Facebook that it is prepared to “initiate strike on a moment’s notice.”

Fairfax County supervisors discussed the matter and details of the county’s contract with Transdev in a closed session Tuesday afternoon.

The county’s Department of Transportation has also been keeping a close eye on the strike threats and negotiations.

There would be no uncertainty about service if the union agreed to continue the current collective bargaining agreement for a 30- or 60-day period, King said.

“We even offered an extension last week with full retroactivity because we don’t believe that there’s a reason for the general public to have to have anxiety over their bus service,” King said.

They had previously proposed extensions without retroactive increases.

“Fairfax Connector should be a simpler negotiation in the fact that you’re working from an existing agreement,” King said.

Negotiations at Fairfax Connector did not begin until November, but there were seven bargaining sessions held last month.

“I do believe that there’s a path in both negotiations to reach agreement,” King said.

What is Metro paying?

It remains unclear exactly what Metro is paying or penalizing Transdev for during the strike at the Cinder Bed Road garage, but the agreement between Metro and the company does require a contingency plan outlining the reduced service that would be operated in the event of a strike.

“We’re paid in accordance to our contract,” King said.

He declined to elaborate.

Metro has declined to get involved in the negotiations.

The transit agency is still preparing to contract out at least some work on the Silver Line extension to Dulles International Airport and Loudoun County that is expected to open late next year.

That partial privatization plan is a major complaint Amalgamated Transit Union Local 689 has raised during the current strike, including threats last month to expand disruptions if the contract goes through.

The union’s main contract with Metro also opens for negotiations next year, so the strike extends to broader issues.

Transit service experience, providing infrastructure or helping to cut costs could all be valid reasons for local agencies to contract out operations, King said.

Numerous local bus systems are privatized, including contracts to Transdev in places such as Loudoun County. 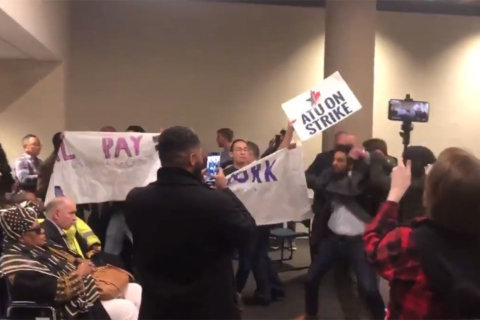