Concrete problems, communications concerns, and traffic or safety changes without permission are among problems raised in Purple Line oversight documents obtained by WTOP through a public records request.

The problems, identified by the state for Purple Line Transit Partners, include multiple issues with concrete in the new Bethesda Metro entrance shaft, which will connect Wisconsin Avenue to the Purple Line platform and Metro platform using a deep elevator bank. The problems are so
significant that the concrete in place this summer was “considered defective” by the state.

Any plans for fixes need to be approved by both the state and Metro.

Despite the issues and previous delays due to lawsuits, Maryland plans to open a portion of the line (likely near the New Carrollton end) by the end of 2022 and the rest of the Purple Line — a 16-mile, 21-stop light-rail line connecting New Carrollton, College Park, Silver Spring and Bethesda — sometime in 2023.

Still, the problems are particularly notable given similar high-profile concerns on other construction projects in the area, such as the Silver Line extension to Dulles Airport and Loudoun County, that have run into construction problems and delays.

Like most construction projects in the region, the Purple Line is being built for the state by contractors. But in the Purple Line’s case, the private companies have also been responsible for final project designs and will also operate the line for the state for decades.

“There is no anticipation that this work will impact the overall schedule and any cost associated with these quality issues will be the responsibility of PLTC,” Purple Line Transit Constructors spokesperson Carla Julian said in a statement.

The 47 oversight reports issued by the state as of late August began with concerns in 2016 and 2017 about problems with communication to the public; contractors who went onto private property without proper permissions more than once; and traffic safety issues. Some were minor and were more easily resolved.

Among other concerns though, the state has found work was started multiple times without final approvals for construction plans.

In 2017 and 2018 for example, work began on phases of the new Bethesda Station at Elm Street — and the second entrance to the Metro station below — without proper approvals.

In July 2018, design drawings were returned with a direction to make revisions, but work started less than two weeks later anyway. Work has been done elsewhere prior to final blueprint approvals at least as late as this past summer.

At the Bethesda shaft, which will run 100 feet deep, “Ring and Header beams concrete does not meet the criteria of WMATA … and is considered defective,” an oversight report issued Aug. 1 said.

The report noted “multiple deficiencies” in late July, when the concrete forms were removed with “at a minimum improper consolidation, voids, visible cold joints and delamination.”

Protocols call for detailed additional testing, repairs or replacement and approval from Metro for any fixes.

“PLTC did identify concerns with the concrete placed at the Bethesda shaft and decided to fully remove and replace this concrete. Performing adjustments to work put in place and sometimes altogether removing and reinstalling that work is not uncommon in the industry — especially on mega projects,” Julian wrote in an email.

The frame of the shaft is scheduled to be finished next summer, with the build-out inside it finished by the end of 2021.

There are similar concerns at the Lyttonsville Place Bridge, which reopened after a more than six-month closure for replacement.

Work there on piles and retaining walls was done without required approvals, and resulted in concerns about “multiple deficiencies” in the concrete bridge deck that supports traffic, the approach slabs leading up to the bridge, and the concrete sidewalk on the south side of the bridge.

The problems identified in December 2018 include concrete out of tolerance, cracks in the approach slabs, pockmarks and other problems more than a quarter-inch deep, and imprints in the concrete from boots, hoses and more.

On the sidewalk, the concrete “has honeycombed sections, voids, and does not meet the minimum cover requirements for welded wire reinforcement,” a report summary said.

Fixes will address any safety concerns at the bridge, Julian said.

“The Lyttonsville Place Bridge is a separate issue where our quality control and assurance process has identified work that requires attention from the team. PLTC engineers have determined a plan of action that is currently being reviewed for approval,” Julian said.

Concrete issues have been raised recently about other parts of the project too — from concrete light pole foundations at Silver Spring International Middle School that were not mixed properly to foundation issues and a failure to properly test concrete elsewhere for potential problems.

Maryland found a shaft that had groundwater inside, which could have contaminated the concrete, and where concrete was not being poured properly.

In another case, concrete was placed in a duct bank on Ellin Road in January of this year, even though it failed tests. That is among the oversight reports that have been resolved, in this case by addressing it while leaving the concrete in place.

A similar resolution was reached for concrete problems in a number of drilled shafts where the work was not done properly. The state found the concrete placements for the shafts were not continuously monitored by quality control, as required during concrete pouring operations.

This June, Maryland also raised concerns about monitoring of the thickness and applications of protective coatings on some walls.

In two other cases, there were also concerns about precast concrete sections that were either delivered or about to be delivered to the project but had gaps or other issues.

Other issues raised include pipes and drainage installations that had to be tweaked; a failure to hold a crucial preparatory meeting for continuity and stray current testing; and a failure “on multiple past occasions” to properly protect reinforcing steel from rusting, dirt, oil and grease.

Design on the Purple Line is nearly complete, with construction around one-fifth of the way finished.

More than 20 of the future light-rail modules have already been put together in New York by a subcontractor.

Editor’s Note: This story has been updated to include responses from the Purple Line Transit Constructors. 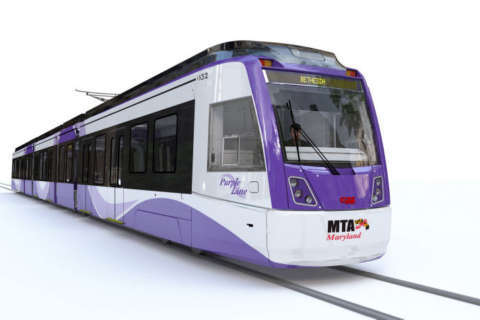