‘More paving than ever before’ — DC addresses record potholes

After record rains and pesky potholes, the District hopes significant repaving efforts this summer will help turn things around on the roads.

“We are doing more paving than ever before,” said Jeff Marootian, director of D.C.’s Department of Transportation.

DDOT expects to complete the planned repaving of 88 miles of the city’s roads this year as long as the weather remains warm and dry into the fall. Last year, paving continued into late November.

Extreme heat does not prevent paving operations on the roads, but cold and rain do.

“We saw historic weather events last year that did significant damage to our roadways, and so we are in the process now of rebuilding from that damage, and our goal is to eliminate all of the roadways that are in poor condition. That will help us ensure we’re able to maintain them going forward,” Marootian said.

The city’s own projections show that even if progress is made, it could take about five or more years to address all of the roads in the worst condition.

DDOT is still doing some cleanup from potholes and other problems that opened up after last month’s flash flooding and other storms, but has addressed the most significant problem — the washout of Canal Road.

The paving and other work is just a piece of the construction that has led to lane closures, parking restrictions or other temporary changes in some spots.

Temporary safety fixes on Florida Avenue in the wake of a deadly crash during a police chase are due to be completed in a few weeks, Marootian said.

Other similar projects include changes in Takoma to the intersection of Blair Road, Cedar Street and 4th Street Northwest.

Construction starting later this month is planned outside of rush hour, but could require Metrobus stop relocations or other detours. When work is done next spring, 4th Street will become one-way with a bike lane, and the intersection will be easier to drive or walk through.

“In addition to doing more paving than ever, we’re also doing more pavement markings than ever before. We are adding crosswalks and upgrading them to high-visibility crosswalks; we are re-striping bike lanes, and making sure that we’ve got all of our infrastructure in a state of good repair,” Marootian said.

Improved markings are scheduled along Interstate and D.C. 295, the Southeast-Southwest Freeway, the Roosevelt Bridge and I-66, 14th Street Northwest, 4th Street Northeast, around a number of schools, and on a number of other roads. 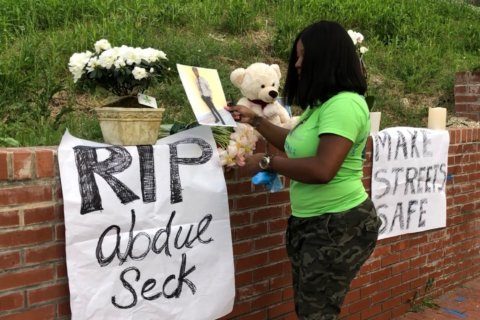