If you're driving down Interstate 66 in Prince William County, Virginia, you might be greeted by a pair of lanky, steel arms. See photos.
Listen now to WTOP News WTOP.com | Alexa | Google Home | WTOP App | 103.5 FM

If you’re driving down Interstate 66 in Prince William County, Virginia, you might be greeted by a pair of lanky, steel arms.

No need to worry: That’s just “Steve the Crane.”

The construction crane, which is being used to work on a bridge near Bull Run Regional Park, is sparking some serious meme creativity with commuters. After all, its two skyward-stretched arms hold so much possibility.

Members of a local Facebook group called “Western Prince William Chatter” have taken notice and are flexing their photoshopping skills. Is Steve declaring the next Lion King? Has Steve triumphantly made it up the steps in front of the Philadelphia Art Museum? Is Steve yelling, “Autobots, roll out”? 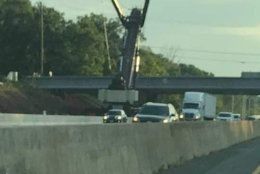 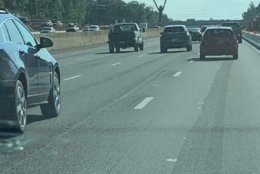 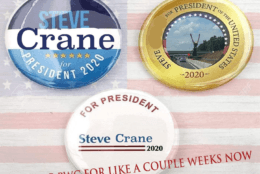 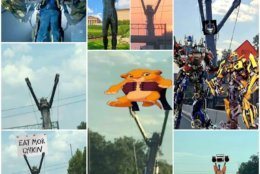 “We’re just happy to see that people have found joy on a daily basis seeing a crane resting during the daylight hours,” said Brett Crouse, marketing coordinator with Digging & Rigging Inc., which is the company that owns Steve the Crane. “He’s making a name for himself along 66.”

Crouse isn’t sure how the crane came to be known as Steve, but he’s happy to hear that the roadside superstar is “putting a smile on many people’s faces throughout the day.”

And, Steve is not just a pretty crane — he’s doing serious work with a reputable family business as the widening of I-66 continues, Crouse added.

But don’t expect Steve to stay in one place: Crouse said Steve will make the move to Sudley Road in Manassas by Monday night.