The nation’s best cities for biking include two in the D.C. metro area, according to the 2019 Places for Bikes City Ratings.

People for Bikes, the Colorado-based organization that calculates the Places for Bikes City Ratings, said one reason Arlington made the top five was because of its efforts to help make bikers feel safe and well-accommodated traveling on two wheels.

The organization noted the county board’s unanimous vote last month to encourage more residents to pedal around the city, and efforts to back up the encouragement with concrete safety improvements — such as integrating protected bike lanes into street repaving plans and use of a contraflow bike lane.

Such facilities are intended to increase cyclist safety and provide a more seamless connection to a network of bike lanes. Arlington’s plans to increase shared and dockless bike options were also noted as reasons for Arlington’s high rank.

The top two cities on this year’s list are Boulder and Fort Collins in Colorado. The third and fourth ranking cities for 2019 were Eugene, Oregon, and Manhattan. 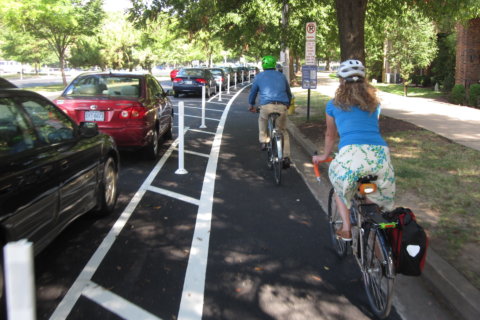