HAYMARKET, Va. — Commuters desperate for a faster or easier way to get to work surged to a new commuter lot Monday morning, with dozens taking advantage of free bus service between Haymarket and Arlington.

While transit launches can sometimes be slow to get off the ground, Prince William County Del. Danica Roem said many of the riders on the first buses believe it will save them significant time, money and stress amid years of Interstate 66 toll lane construction.

“My opposition to the tolls on I-66 has never changed, but the fact of the matter is they’re going in, so the next best option for us here is to make sure that we have as much reliable and cost-effective mass transit going along those routes every day so people don’t have to pay so much money for those tolls and to sit in traffic in the first place,” Roem said.

People from Gainesville, Haymarket, Warrenton, Bristow and even around Remington and Front Royal used the buses Monday, which are free into February, then half-price for the next several years.

The Heathcote Commuter Lot, which opened Monday on the north side of Interstate 66 at U.S. 15, cost about $7 million. It has 230 spaces and several bus shelters for the commuter buses that run toward Ballston and Rosslyn in the morning and back in the afternoon. In a first for VDOT, a new parking management system posts on a sign how many spaces are available.

Lane closures and other construction work along Interstate 66 are ramping up around the clock.

Additional commuter parking lots are scheduled to be built as part of the toll lane project, including the much larger lot near U.S. 29 in Gainesville, where crews have been clearing land.

While that lot, with about 2,000 spaces, is scheduled to open next summer, VDOT Megaprojects head Susan Shaw said the heavy rains this year make it unlikely the project will be finished on time. It may not open until next fall.

“Part of the commonwealth’s vision of moving more people with fewer vehicles,” Department of Rail and Public Transportation Director Jennifer Mitchell said. “They also offer congestion reduction to our region, taking solo drivers off our roads during what can feel like ever-expanding rush hours.”

“So we must prepare and learn how to move people better and more flexibly,” Anderson said.

One of those commuters taking advantage of the flexibility left their car with the car alarm going off every few minutes.

Even during a ceremonial ribbon-cutting later Monday morning, VDOT Northern Virginia Chief Engineer Helen Cuervo called it music to her ears, since it meant people were using the lot.

“That’s what this is all about,” she said. 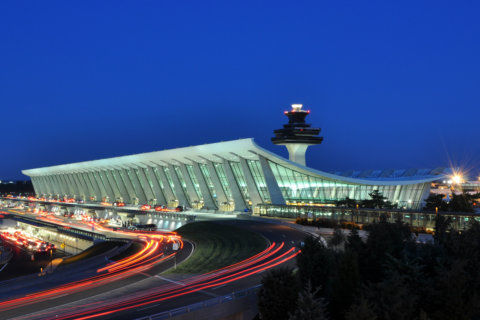