Construction on one of the busiest Interstate 95 interchanges in the Fredericksburg area has wrapped up on schedule, but there are a number of other major projects in the area set to continue for years.
Listen now to WTOP News WTOP.com | Alexa | Google Home | WTOP App | 103.5 FM

WASHINGTON — Construction on one of the busiest Interstate 95 interchanges in the Fredericksburg area has wrapped up on schedule, but there are a number of other major projects in the area set to continue for years.

The $21 million realignment of the exit ramps at I-95 and Route 3 (Exit 130) is meant to reduce the risk of crashes in places where it had been more difficult to merge and weave.

Among the changes that had already opened, drivers exiting southbound I-95 to westbound Route 3 now choose between lanes dedicated to entering the Central Park development or separate lanes to use Route 3/Plank Road.

Traffic heading eastbound on Route 3 now uses left-turn lanes to access I-95 northbound with a longer acceleration ramp than the previous right-hand loop.

There are also now road markings to guide drivers earlier to avoid late merging and weaving.

Major construction is underway for toll lanes, expanded interchanges and other projects that will create construction delays through Spotsylvania, Stafford and Fredericksburg for the next five or more years.

The 95 Express Lanes, which charge tolls to drivers who do not have at least two other people in the car and an E-ZPass Flex switched to HOV mode, are being extended about 10 miles south to near Fredericksburg, where they will connect with new bridges over the Rappahannock River.

The new $132 million southbound bridge that will separate local and through traffic is due to open around the same time as the toll lanes in 2022. A $132 million northbound span that had initially been canceled is now expected to begin construction in 2020 and open in 2023.

Work is also ongoing through next year to upgrade the interchange at Exit 118 for Mudd Tavern Road/Thornburg, replace the overpass at Exit 133 for Route 17, and on an even larger interchange shift and reconstruction project at Exit 140 for Courthouse Road. 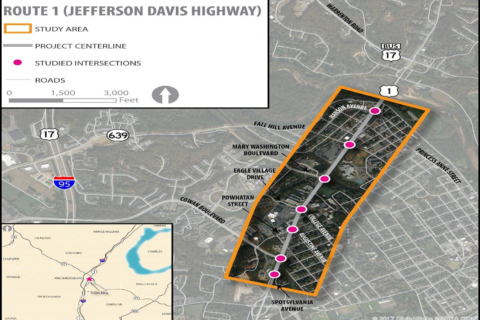 Fredericksburg, VDOT discuss changes that could shave time off your trip on US 1