New electric-assist Capital Bikeshare bikes are being placed into docking stations for use across the region Wednesday, which could make it much more reasonable to ride uphill.
Listen now to WTOP News WTOP.com | Alexa | Google Home | WTOP App | 103.5 FM
(1/2) 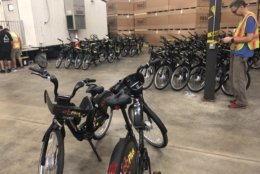 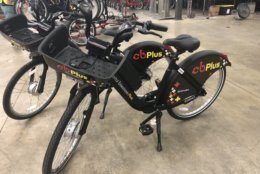 WASHINGTON – New electric-assist Capital Bikeshare bikes are being placed into docking stations for use across the region Wednesday, which could make it much more reasonable to ride uphill.

The first 80 of the pedal-assist Capital Bikeshare bikes will initially be available for about three months as part of a pilot program to run through November. As signaled last week, it marks the entry of the publicly owned system into the market that now also includes scooters and dockless bikeshare companies like JUMP that have their own e-assist bikes.

“It feels like you have bionic legs,” Capital Bikeshare General Manager Eric Gilliland said as WTOP tried out one of the bikes Tuesday afternoon.

The bikes have a better basket in front, an “infinity gear” that riders adjust back and forth for ease of pedaling, a bell that is easier to use, improved tires, wheels and fenders and several other differences from regular bikeshare bikes. The gear shift does not click from one gear to another, but rather adjusts smoothly. The bike detects the pressure a rider is putting on the pedal in order to activate the motor.

The bikes were designed by Motivate, the current operator of Capital Bikeshare, rather than the Montreal-based firm that designed the originals.

The new black bikes labeled “Capital Bikeshare Plus” have a motor to help boost speeds up to 18 mph, power a rider up a hill with little effort, or just to make it easier to cruise. In the Bikeshare app, a station with an electric bike available will show up with a lightning bolt logo. They are expected to go about 35 miles on a single charge, although that could change significantly depending on whether the bike is ridden uphill, downhill or on a largely flat route.

The e-bikes are about 15 pounds heavier than the already-sturdy regular red Bikeshare bikes.

Electric bikes can make riding a more attractive way to get around not just due to the reduced effort and sweat, but also due to the faster trips they provide. It can also frequently make biking faster than other modes of transportation.

“Our riders will now have the opportunity to commute longer distances with a little more power behind the pedal,” District Department of Transportation Director Jeff Marootian said in a statement.

In some parts of the region, there are still rules on the books that restrict the use of electric-assist bikes on trails or sidewalks.

Riders will need to turn on the electric-assist feature when checking a bike out and be sure that the battery for the motor has enough charge. Pressing the power button will activate the motor and some lights just above the power button that show the level of charge in the battery. Capital Bikeshare recommends ensuring the battery shows at least two lights immediately after turning on. Once on, a single green light is displayed to show that the motor is powered on.

The motor automatically turns off, so riders do not need to do anything special at the end of a trip. When the battery is low, Capital Bikeshare hopes to automatically lock the bike in a dock until staff can come around to swap out the battery for one with a full charge.

The 80 bikes will represent less than 2 percent of the total Capital Bikeshare bikes serving more than 500 docking stations in D.C., Arlington, Alexandria, Fairfax County, Montgomery County and now Prince George’s County. That means it could be hard to count on them being available during the pilot program and that sometimes people traveling together may not both be able to get one.

After the pilot ends in November, the usage rates, maintenance requirements and durability of the bikes will be factors in when the electric-assist bikes return and in how many of them may be put in place permanently.

To start, the bikes will be placed across all of Capital Bikeshare’s member jurisdictions. The bikes are not initially going to be rebalanced in the same way the regular red bikes are until Bikeshare gets a better feel for how riders are using them. Capital Bikeshare is separately beginning to use a new rebalancing tool this week also: a tricycle that bikes can be loaded onto rather than the white vans bikes are driven around in now.

“We hope that e-bikes will open the door for more Fairfax County residents and visitors to enjoy the many benefits of getting around by bicycle,” Fairfax County Bicycle Program Manager Nicole Wynands said in a statement.

If all goes well, the small pilot could be expanded next year.

The same model of electric-assist bike is being trialed in San Francisco, New York and Montreal. In New York, Gilliland said the e-bikes are already seeing significantly more use than the regular CitiBikes.

Operating the electric bikes can be somewhat more expensive than the regular bikes though, so there could be additional fees adopted for electric bike trips, or costs could be folded into membership fees if the region’s departments of transportation choose to recoup the costs of any permanent program in the future.

The color of the bikes could also change if they become a permanent part of the system.