BETHESDA, Md. — A day before construction for the Purple Line closes a Montgomery County trail, opponents of the transit project gathered for a final walk. 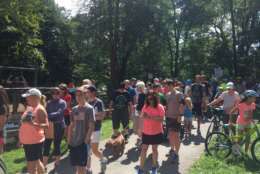 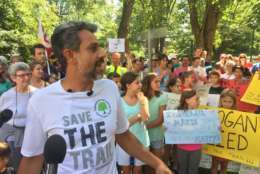 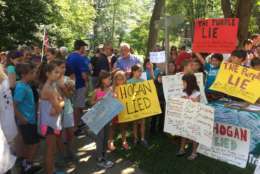 The Georgetown Branch Trail will close Tuesday and will remain blocked off for four to five years.

“We’re infuriated because we’ve only been told of the trail’s closure with less than a week’s notice,” said Ajay Bhatt, president of Friends of the Capital Crescent Trail, a group which opposed the Purple Line project.

The group argued that the project will have a negative impact on the environment and will not help alleviate traffic on the roads.

The organization, which includes homeowners who live along the trail, has been behind several legal challenges to the project, including one which remains in a federal appeals court. That same court blocked a lower court judge’s ruling, which put the project on hold but also called for a three-judge panel to hear the case.

Those gathered chanted, “Save the trail,” as Bhatt expressed to the crowd his shock that construction work is getting underway before the panel hears their challenge.

John Fitzgerald, a Chevy Chase environmental attorney representing the group, said another separate lawsuit was filed against the line. He plans to ask a judge Tuesday for a temporary restraining order, which would delay construction.

“The plan to close the trail, to stop that, to stop the cutting of trees, to stop the moving of earth until this whole thing can be fully adjudicated,” Fitzgerald said.

Work on the trail from Woodmont Avenue in Bethesda to Talbot Avenue in Silver Spring will include clearing trees to make room for the light rail train system. The 16-mile long line, $2-billion public-private project will eventually connect Bethesda to Silver Spring and New Carrollton when completed.

Officials broke ground on the Purple Line Aug. 28, with the signing of a $900-million funding agreement from the federal government.

Purple Line NOW, a group supporting the light rail line, blamed years of legal battles brought on by opponents, which it claims set back construction schedule, for the limited notice to residents on the trail’s closure.

“Unfortunately, the lawsuit filed by project opponents has delayed the onset of construction by a year, which has directly resulted in an accelerated construction timeline and a host of additional complications,” the group said in a statement.

Friends of the Capital Crescent Trail hope a judge will come through in the last hour. They started an online petition they hope will get Maryland Gov. Larry Hogan’s attention and encourage a change in heart when it comes to the project.

“It’s really sad that they’re not connecting with the communities to find out the best way to do this,” said Ted Gutman from Bethesda. 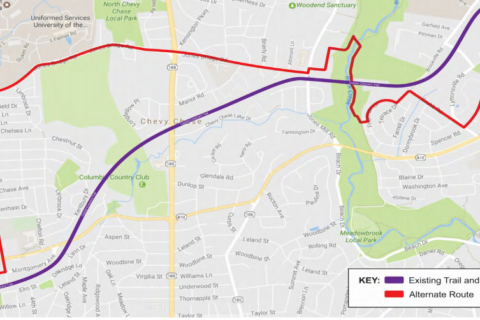