A stretch of Beach Drive has been closed nearly a year for a total reconstruction of the road, but the National Park Service says it'll be open again by the end of August.
Listen now to WTOP News WTOP.com | Alexa | Google Home | WTOP App | 103.5 FM

WASHINGTON — About 12 million drivers a year use the stretch of Beach Drive that runs from Tilden Street south to Rock Creek Parkway, a windy, scenic stretch of road that allows drivers going to and from downtown to avoid the traffic lights and urbanization of Connecticut Avenue and 16th Street. It’s been closed nearly a year for a total reconstruction of the road, but the National Park Service says that stretch of Beach Drive will be open again by the end of August.

“Drivers are going to have a smooth, easy and beautiful experience when this segment reopens,” said Jenny Anzelmo-Sarles, a spokeswoman with the National Park Service. “You can say goodbye to those potholes and puddles that were so frequent.”

The stretch of road, roughly two miles, was torn up and rebuilt from the ground up, using 5,100 tons of asphalt. The trail that runs alongside the road, used by cyclists and pedestrians, was also torn up and rebuilt, and widened from six to eight feet.

Crews also replaced hundreds of tiles inside the zoo tunnel, while making that section safer for pedestrians too. 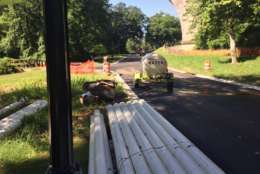 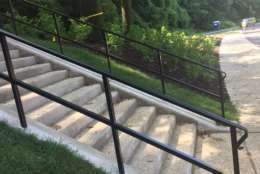 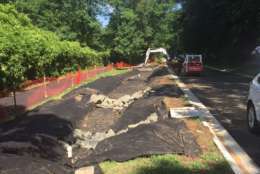 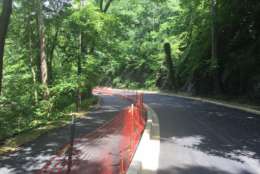 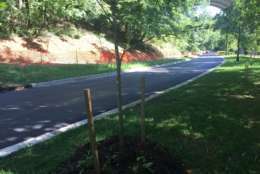 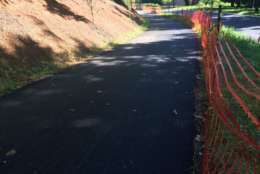 “We’ve narrowed the travel lanes, and put in a pedestrian access that’s wide enough for utilization,” said project specialist Danny Schaible. “We do request that bicyclists walk their bikes through there because it is a little bit narrow.”

However, at five feet across on one side, two people can now get past one another. The sidewalk on one side remains two to three feet wide.

“Originally the sidewalk through the tunnel wasn’t designed for people to use,” Anzelmo-Sarles said. “It was meant, in the case of an emergency, for people to get out.

Further north, a new pedestrian entrance to the zoo was created at Harvard Street Northwest, with the park service adding a new staircase and wheelchair-accessible ramp. A crosswalk and flashing lights will also help warn drivers approaching the intersection.

“For years we’ve heard that people wanted this,” Anzelmo-Sarles said.  “And we’re able to make it happen with this project.”

As soon as this segment of the project wraps up, and the southern stretch of Beach Drive opens, the park service will close Beach Drive from Tilden north to Military Road to for more work. They’ll open things up again between Tilden and Blagden Road when that stretch is done, which will probably take about six months.

Eventually, all of Beach Drive, from Rock Creek Parkway to the Maryland line, will be rebuilt.