Amtrak service is getting back to normal just in time for the weekend after a track problem in New York City, which would sound familiar to Metro riders, derailed a train this week.
Listen now to WTOP News WTOP.com | Alexa | Google Home | WTOP App | 103.5 FM

WASHINGTON — Amtrak service is getting back to normal just in time for the weekend after a track problem in New York City, which would sound familiar to Metro riders, derailed a train this week.

Amtrak was aware of a track problem near the entrance to New York’s Penn Station before a New Jersey Transit commuter train derailed there on Monday, CEO Wick Moorman said.

“We were aware that we had some issues in that area, but we felt that we could maintain it in proper order when we finally received time to get in there and maintain it,” Moorman said Thursday.

That did not happen in time.

Weakened timber ties lying under a piece of track in Penn Station is believed to be the cause of the derailment.

There is significant pressure on Amtrak to keep trains moving at Penn Station, where hundreds of thousands of riders traveling to and from New Jersey squeeze through a tunnel with just two tracks.

The pressure on Amtrak to keep trains running is similar to the pressure facing Metro in years past. Federal investigators have suggested that Metro prioritized moving commuters over safety.

Crumbling wooden crossties near the East Falls Church Station were not fixed despite inspections that found they were not in good condition. Follow up inspections were either falsified or not correctly reported. The distintigrating crossties allowed the rails to shift apart and led to a derailment there last summer.

The NJ Transit derailment was the second derailment in as many weeks at Penn Station. An Acela train slipped off mismatched rails near a station platform the week before.

“I want to personally apologize to everyone who has been inconvenienced by all of the delays and cancellations,” Moorman said. “We know we let them down.”

No one was seriously hurt in either Penn Station derailment.

Repairs tied to this week’s derailment were completed Friday morning, with regular train service resuming late in the morning rush hour. The derailment disrupted Amtrak service throughout the Northeast this week. 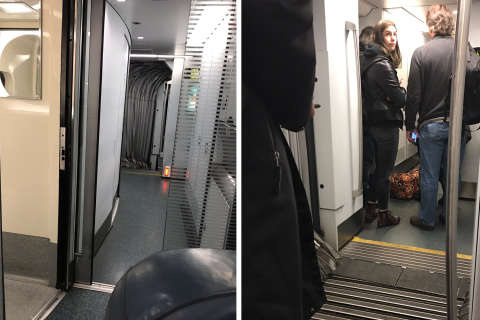