WASHINGTON — The president of Metro’s largest union said Thursday that contract talks with the agency have “broken down,” nearly nine months after the previous contract expired.

“That means that we’re not talking any more,” Jeter said.

“We’re not getting anywhere. You can only have a series of ‘nos’ so many times before you decide, OK, we’re not going anywhere with this,” she said.

She plans to share the current status of the negotiations with members of the union, who hold more than half of all Metro jobs.

Jeter would not say whether the union is preparing to move from negotiations to binding arbitration. She has previously described talks as stalled at other stages in the process.

Metro and the union are required to go to binding arbitration if an agreement cannot be reached, in exchange for a provision that bars a union strike.

Metro Board Chair Jack Evans told reporters Thursday that the agency is still in negotiations with the union to “get the best deal we can.”

It is not unusual in the transit industry for workers to continue working under an old contract until negotiators reach a deal. 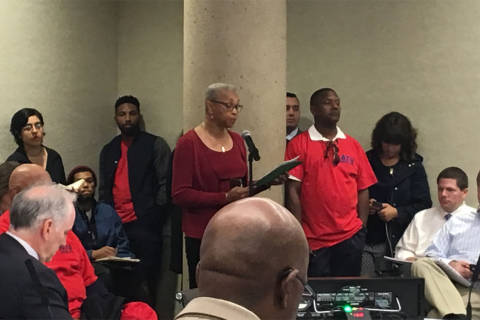