Northern Virginia’s transportation system is mediocre, according to the people who use it every day, and that’s hurting their quality of life.
Listen now to WTOP News WTOP.com | Alexa | Google Home | WTOP App | 103.5 FM

WASHINGTON — Northern Virginia’s transportation system is mediocre, according to the people who use it every day, and that’s hurting their quality of life.

“That doesn’t mean that people think traffic is just fine now and there’s no more congestion,” NVTA Chairman and Prince William County Supervisor Marty Nohe said in an interview, “but Northern Virginians recognize that the NVTA, along with our partnerships with the transit agencies and VDOT, are making the investments that in the long run will give them the solutions that they’re looking for.”

The authority is in the process of developing a long-term plan called Transaction to cover everything from regional road projects to expanded bus or bike options.

Commuters’ top desires appear to be getting where they are going more quickly, followed by keeping transportation affordable, new road improvements and more predictable trip times. On many of those issues, the company that conducted the survey, Heart + Mind Strategies, found that people believe there is “room for further improvement.” For example, commuters only usually leave time for about three minutes of additional delays beyond their normal commute, which can often leave them late. 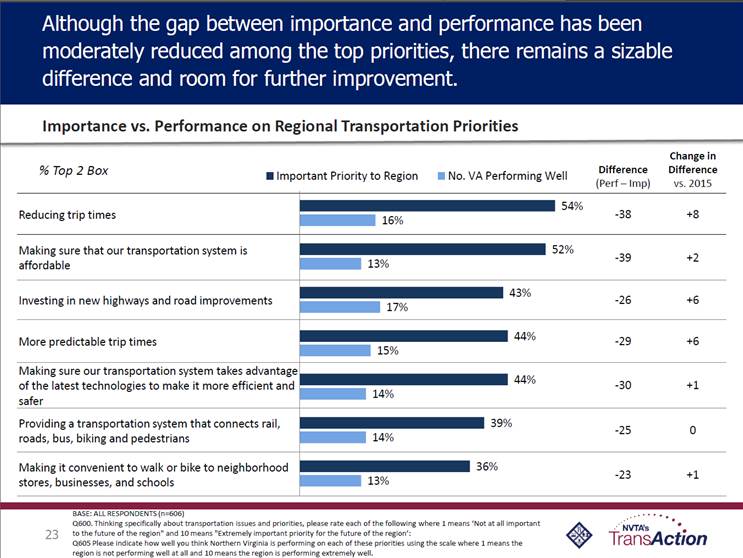 Those who took the survey said the most important transportation improvements in the region are upgrades for Route 7 or Route 1 and new or updated rail lines, such as the Silver Line extension to Loudoun County and a potential VRE expansion in the Manassas or Haymarket areas. Those were followed by improved highway or transit connections across the Potomac River and upgraded and expanded local transit such as buses.

“Yes, [commuters] want highways improved, but they also want transit, and not just to have transit available — they want to know that they have multiple transit options, and that those transit options are going to be reliable,” Nohe said, citing the widening of Route 7 over the Dulles Toll Road as he looked out at the bridge project aimed at easing a bottleneck and replacing a crumbling structure.

People who live and work in the same county or city, live in Arlington or Loudoun, and who reported making between $50,000 and $100,000 per year, were most likely to rate their quality of life higher than others who responded to the survey.

Even including non-transportation issues, more people — about one-third — chose reducing traffic congestion and improving transportation options as the most impactful factor on their quality of life than any other issue. Keeping housing affordable ranked second.

In addition to road projects, some transportation solutions focused on technology to ensure people can figure out the best options or get off the road through telecommuting.

“There will never be enough money to solve every transportation problem in Northern Virginia, so what the Northern Virginia Transportation Authority is focused on is identifying those regional projects that can give us the biggest impact in the most cost-effective manner so that we can solve the problems that are available to us, and then focus on the solutions that might be a little further out of reach a little further down the road,” Nohe said.

One technology drawing mixed reviews from the 606 people living in Northern Virginia who responded to the survey is self-driving cars. A question about them drew a mix of responses ranging from “good” or “great” to “scary” and “dangerous.”

Weekend Road and Rail: Stops on 66, I-95 and Suitland Parkway closures

Metro hopes to bring back service after ‘tough period’