The vaccine was 85% effective in preventing symptoms in volunteers 65 and older, the company said.

The numbers are not terribly different from data the company released in a statement Monday. As with Monday’s data, the company has released them via news release and not in a peer-reviewed report or as a formal submission for US Food and Drug Administration review.

“The primary analysis is consistent with our previously released interim analysis, and confirms that our COVID-19 vaccine is highly effective in adults, including those aged 65 years and over. We look forward to filing our regulatory submission for Emergency Use Authorization in the US and preparing for the rollout of millions of doses across America,” Mene Pangalos, executive vice president for biopharmaceuticals research for the company, said in a statement.

On Tuesday, the independent Data and Safety Monitoring Board (DSMB) that reviews data from multiple Covid-19 vaccine candidates expressed concern over AstraZeneca’s announcements on its latest findings, and, unusually, the National Institute of Allergy and Infectious Diseases publicly announced those concerns.

“The DSMB expressed concern that AstraZeneca may have included outdated information from that trial, which may have provided an incomplete view of the efficacy data,” the NIAID, which has helped AstraZeneca run trials in the US, said.

“We urge the company to work with the DSMB to review the efficacy data and ensure the most accurate, up-to-date efficacy data be made public as quickly as possible.”

The trial of 32,449 volunteers in the US, Peru and Chile showed people who got the vaccine were 76% less likely to have any symptoms of coronavirus compared to the one-third of participants who got placebo. The vaccine is given as two doses, four weeks apart.

“There were 190 cases in the primary analysis. There are 14 additional possible or probable cases to be adjudicated so the total number of cases and the point estimate may fluctuate slightly,” the company said.

“AstraZeneca will also submit the primary analysis for peer-reviewed publication in the coming weeks.”

And as with other coronavirus vaccine trials, the volunteers were not regularly tested for Covid-19, so it’s not known how many may have gotten asymptomatic infections.

“A key secondary endpoint, preventing severe or critical disease and hospitalization, demonstrated 100% efficacy. There were eight cases of severe COVID-19 observed in the primary analysis with all of those cases in the placebo group,” the company said.

“The vaccine was well tolerated, and no safety concerns related to the vaccine were identified.”

NIAID director Dr. Anthony Fauci earlier this week called the company’s release of premature data an “unforced error” — a sports term meaning it was their own mistake.

He told ABC’s Good Morning America on Tuesday that the AstraZeneca vaccine “is very likely a very good vaccine,” and this situation does nothing but cast doubt about the vaccines and maybe contribute to vaccine hesitancy.

Fauci said that this was not necessary and that the data are “really quite good, but when they put it into the press release, it wasn’t completely accurate.”

AstraZeneca, which developed the vaccine with Britain’s University of Oxford, has struggled for acceptance of its vaccine.

It was the first immunization out of the gate in the western world, going into the arms of volunteers on Jan. 4. But AstraZeneca’s development of the vaccine has hit multiple bumps, from news that two volunteers developed neurological symptoms last fall to a stall in the rollout of the vaccine in several European countries amid fears it might have caused blood clots.

The European Medicines Agency has since said there’s no evidence the vaccine can cause blood clots. 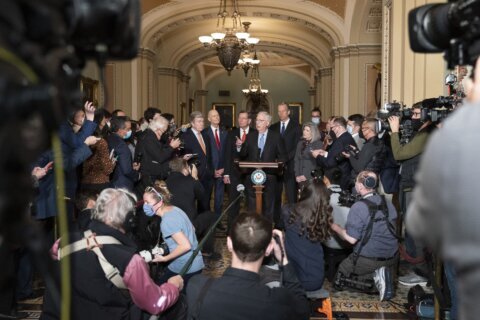