As a growing number of governors move to relax public health restrictions with the recent dip in COVID-19 cases, new research from the Centers for Disease Control and Prevention warns that lifting such measures could result in a new wave of cases and deaths.
Listen now to WTOP News WTOP.com | Alexa | Google Home | WTOP App | 103.5 FM

As a growing number of governors move to relax public health restrictions with the recent dip in COVID-19 cases, new research from the Centers for Disease Control and Prevention warns that lifting such measures could result in a new wave of cases and deaths.

In the agency’s Morbidity and Mortality Weekly Report, CDC researchers said Friday that mask mandates imposed in states last year were associated with a nearly 2% decrease in the rate of newly reported COVID-19 deaths in the 100 days after the rules were implemented.

For states that allowed restaurants to reopen for in-person dining, the rate of new COVID-19 deaths increased by up to 3% in the months following the lifting of those restrictions.

“This report is a critical reminder that with the current levels of COVID-19 in communities, and the continued spread of more transmissible virus variants, which have now been detected in 48 states, strictly following prevention measures remains essential,” CDC Director Dr. Rochelle Walensky said at a press briefing on Friday.

Dr. Walensky pointed out the report was not the first to conclude such measures could curb the COVID-19 pandemic. Just last month, the CDC concluded the rate of new COVID-19 hospitalizations of adults 18-64 years old declined 5.6% after some statewide mask mandates were put in place.

For weeks, federal health officials have warned that country’s recent drop in COVID-19 cases has stalled. Though cases have plummeted in recent weeks after surging to record highs over the winter holiday season, CDC data show cases still remain far higher than the first peak of the pandemic last April.

At Friday’s press conference, White House chief medical adviser Dr. Anthony Fauci pointed to spikes seen recently in Europe after cases there had appeared to level off. He said transmission in the U.S. remained at a pace that was still concerning.

“That plateau is about 60 to 70 thousand cases a day. When you have that much of viral activity, in a plateau, it almost invariably means that you are at risk for another spike,” said Dr. Fauci.

Dr. Christopher Murray, director of the University of Washington’s Institute for Health Metrics and Evaluation, said Friday that the CDC’s conclusions lined up with the institute’s own findings on the relationship between masks, mandates, and transmission.

In December, Murray’s team had forecast that achieving universal mask use could have saved nearly 130,000 lives from September through February.

Texas Governor Greg Abbott sparked a wave of criticism from some local health officials and the Biden administration on Tuesday, after announcing he would move to lift his state’s mask mandate and reopen in-person dining, citing the decline in cases.

President Biden blasted Abbott’s decision on Wednesday, calling it “Neanderthal thinking.” However, federal officials have acknowledged they have little authority to force states to reverse course on lifting measures.

“We are in constant conversation with the states. And I — suffice it to say that there are plenty of people — health officials, as you know — in every state who feel now is the wrong time to lift the mask mandate,” White House Senior Advisor Andy Slavitt said at a press briefing on Wednesday. 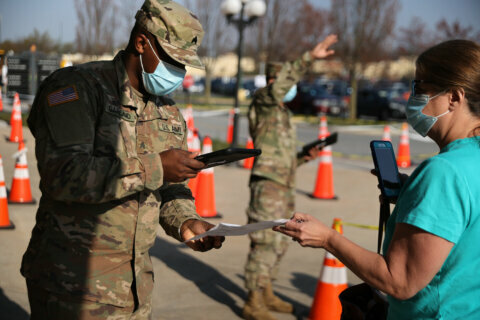