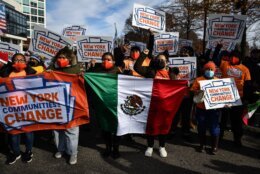 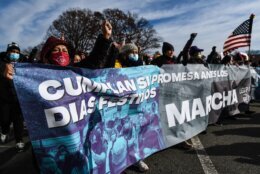 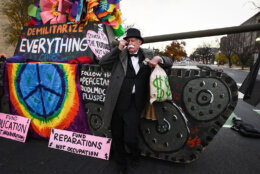 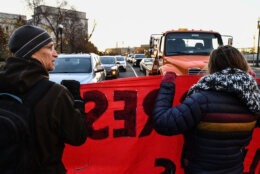 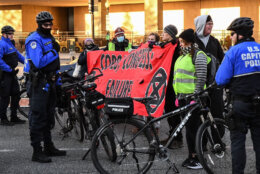 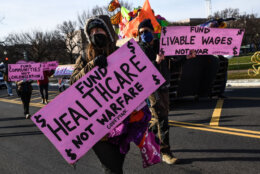 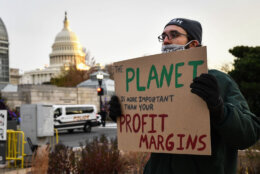 WTOP’s Alejandro Alvarez reported there was approximately 200 people participating in the demonstrations, which were organized by ShutDownDC, SPACEs In Action, CODEPINK, Arm in Arm Washington DC, CCAN Action Fund and Action Rebellion DC, among other groups.

Most were there to call on the U.S. Senate to pass President Biden’s Build Back Better legislation by the end of 2021. Groups had billed today’s action on the Capitol as a “Deadline for Democracy”.

“We need Build Back Better in time for the holidays,” a speaker said.

The demonstrations, which began around 7 a.m., caused delays for morning commuters, but had moved off the main roads by around 10 a.m..

In anticipation of Tuesday morning’s demonstrations, United States Capitol Police (USCP) had shut down several streets adjacent to the Capitol.

Groups still managed to cause disruptions throughout the morning.

Three blockades, with about a dozen people each, managed to stop inbound traffic from the 3rd Street Tunnel and Independence Ave., S.W.

Another blockade (with live music) for health and child care reform halted traffic on Pennsylvania Avenue near the Capitol, where the pavement was covered in chalk messages to Congress, Alvarez reported.

According to the group Extinction Rebellion, two of its members were arrested for blocking 4th and Independence SW.

USCP has told WTOP that 38 people were arrested throughout the day for “obstructing or incommoding”.

Shortly before noon, as the morning’s crowd began to thin, Alvarez reported a large contingent of immigration-rights protesters with the group CASA, along with a handful of other groups, began marching on Capitol Hill.

Some from this morning’s blockades have joined a hundreds-strong, immigrant-led march to the Capitol. We’ve seen protests for immigration reform, climate action, health care and more in one day, united in a call for Build Back Better by year’s end. pic.twitter.com/7aRaYfnOZ8

Get the latest on traffic conditions from the WTOP Traffic Center online and get updates on the 8s at 103.5FM.

WTOP’s Alejandro Alvarez and Jessica Kronzer contributed to this report.