Republican and Democratic members of a Congressional committee fired question after question at the FBI and TSA about the expanding use of facial recognition technology at U.S. airports.
Listen now to WTOP News WTOP.com | Alexa | Google Home | WTOP App | 103.5 FM

Lawmakers on a Congressional committee that’s often sharply divided shared major privacy concerns Tuesday as they grilled representatives of the FBI and TSA about the expanding use of facial recognition technology at the nation’s airports.

Republican and Democratic members of the House Committee on Oversight and Reform fired question after question at an expert panel, seeking to learn more about how digital images of Americans are taken and matched with databases when travelers go through airport security.

More than a dozen U.S. airports use facial recognition technology, including Dulles International and Reagan National. It allows departing international travelers to board flights without the need for submitting paper documents. Facial screening can also be done for passengers arriving in the United States.

Supporters of the widespread testing of the program, also known as biometric boarding, say it cuts down on unnecessary lines and will continue to improve the experience of travelers.

Lawmakers say they understand the goals of the program, but made it clear during Tuesday’s hearing they have serious reservations about how the government has rolled it out and whether privacy issues have been adequately vetted.

“There are real concerns about the risks that this technology poses to our civil rights and liberties and our right to privacy,” said the committee’s chairman, Rep. Elijah Cummings, D-Md.

Cummings and the panel’s ranking Republican, Ohio Rep. Jim Jordan, often clash on matters related to the committee’s investigations of President Donald Trump and his business interests. But they were largely on the same page during the hearing.

Jordan was especially critical of the FBI, pointing to a Government Accountability Office report that said the agency had not met five criteria related to use of facial recognition. He also questioned how well the FBI had coordinated with states that provide photos through their departments of motor vehicles.

“There are all kinds of mistakes when it’s implemented,” he said. “Those mistakes disproportionately African-Americans.”

Lawmakers cited studies that show facial recognition programs have at times had issues correctly matching pictures of people with darker skin tones. But experts testified that the technology has greatly improved in recent years.

An algorithm used by the FBI was shown to have an accuracy of 99.12%, said Kimberly Del Greco, FBI Deputy Assistant Director of Criminal Justice Information Services, noting that the law enforcement agency has been responding to concerns raised in a 2017 report from the General Accountability Office.

But another witness, Gretta Goodwin, GAO’s director for Homeland Security and Justice, confirmed under Jordan’s questioning that the FBI had not met many of the requirements set out in the earlier report. Del Greco said there was a disagreement between the Justice Department and GAO over some of the earlier findings.

Lawmakers from both parties peppered witnesses with a wide range of questions related to how travelers’ photos are used. Rep. Mark Meadows, R-NC, asked a TSA official about a pilot program at Hartsfield-Jackson Atlanta International Airport, that allows travelers to have photos matched to their luggage at a bag drop off.

Meadows asked Austin Gould, an administrator with the Transportation Security Administration, if a picture could have been taken of him at the airport without his knowledge.

“I gave no one permission to take my picture while I’m dropping off my bag. I’m an American citizen,” said Meadows.

Gould said a picture should not have been taken of Meadows without his permission. Gould later said that the process in Atlanta makes it very clear if a traveler is going to have their picture taken, so that bags can be matched to them.

The TSA wants to expand the facial recognition program, ultimately so that it can be used by those traveling within the United States and not just overseas.

“Will travelers be able to opt out (of getting their picture taken)?” Justin Amash, R-MI, asked Gould.

“Yes sir. Travelers will always have the opportunity to not participate in the program,” Gould said.

Last year, the facial recognition program led to the arrests of several people at Dulles, soon after it was implemented. Authorities said pictures didn’t match travelers coming in from foreign countries and it was determined they were using fake passports. 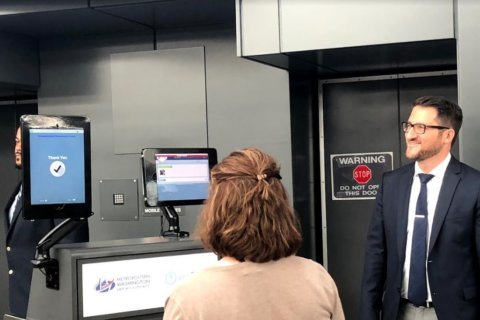