Online sales are making up a bigger share of the toy market than ever before, and Chris Byrne of The Toy Guy, breaks down the situation and gives some recommendations on what to buy and how to save.

WASHINGTON — Online sales are making up a bigger share of the toy market than ever before — they’re projected to make up about 35 percent of all sales in the U.S. this year — and the closing of the Toys R Us chain is both cause and symptom of the situation.

Chris Byrne, of The Toy Guy, told WTOP on Cyber Monday that shoppers who used to go to Toys R Us are mainly going to “places that they went before,” such as Walmart, Target, Kohl’s and the Party City-owned pop-up Toy City. Retailers are offering “great markdowns on toys to get you spend even more money,” Byrne said.

People are also shopping online at Jet.com, Amazon.com and Walmart.com. Surprisingly, even eBay is showing up as a site for new stuff, Byrne said: “Toy manufacturers are building shops on eBay as well as their own shops.”

That’s changed the market, he said in a later conversation.

“There is no one hot toy, and that’s because if you’re looking for something, you can find it online if you’re willing to pay a premium.” It’s been 35 years since the height of the Cabbage Patch phase, and while they’re still available, Byrne said, “you don’t see people slugging it out on the toy aisles to get the last one.”

You can’t interview The Toy Guy without asking about recommendations for holiday gifts, and Byrne shared some of his favorites:

Arcade1Up is selling replicas of 1980s arcade games such as Asteroids, Centipede, Galaga, PacMan and Street Fighter in units at three-quarters size with the original software. “It feels just like you’re playing in the arcade back in the day,” Byrne said. The list price is $299, but Byrne said he’s seen Cyber Monday deals at $249.

Flipslide, by Moose Toys, is a “really challenging game” — an electronic hand-held game that tests memory and dexterity by matching colors. It’s for ages 8 and up and lists for $19.99.

The Crayola Crayon Melter is a kind of pen that “allows you to draw with melted wax, which is really super fun,” Byrne said — “you’re not melting them on the radiators like I did when I was a kid, and they don’t get super warm.”

Brio wooden trains now come with interactive electronic tunnels that control the motion of the train, and they’re another example of old-school toys that will take kids away from computer and smartphone screens: “We’ve been very impressed by the level of classic play” this season, Byrne said.

Byrne added that comparison shopping is a must for anyone looking to save online. He recommends setting up a Google alert for any particular toy you’re looking for, so the deals will come to you.

He also advised putting a toy you’re interested in into your shopping cart on any site you’re browsing. Not only will the retailer hold it for you for a certain amount of time, and send you an email reminding you that it’s there, “they may send you a deal – ‘buy this and get 10 percent off something else.’”

His only caveat is to make sure you don’t wait too long or you may not get it before the holiday. 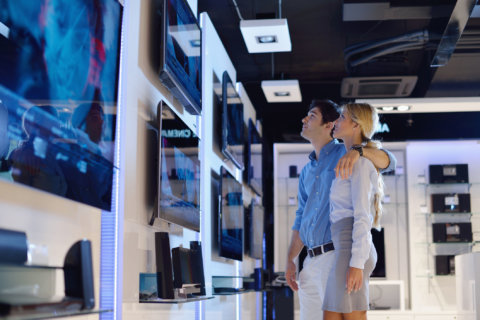