Holidays: 'Enchant' shines with millions of lights in Nats Park | Where to see holiday lights | Send in photos of decorations | How to give greener this season
Home » Car Reviews » Car Review: Chrysler offers…

Car Review: Chrysler offers a minivan that plugs in for some gas-free driving

Chrysler was the originator of the minivan 35 years ago, and the new Pacifica looks to capture some of that magic with its hybrid version.
Listen now to WTOP News WTOP.com | Alexa | Google Home | WTOP App | 103.5 FM
WTOP/Mike Parris
(1/11) 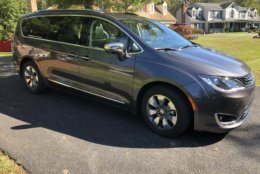 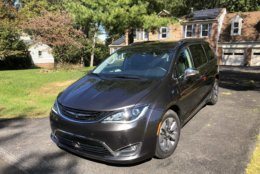 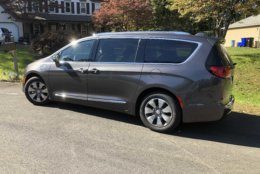 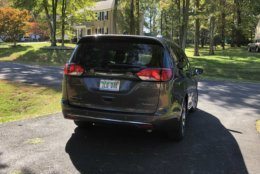 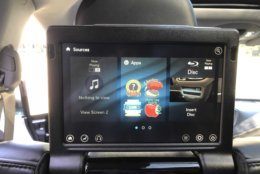 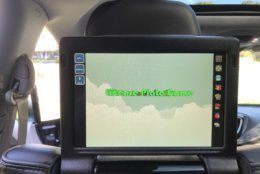 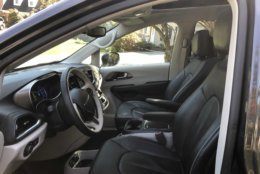 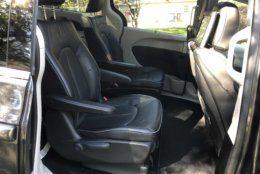 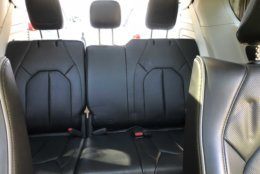 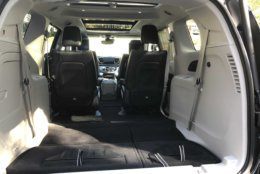 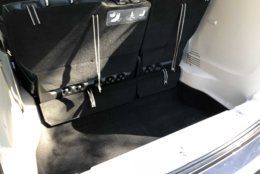 Share on Facebook. Share on Twitter. Share via email. Print.
Chrysler was the originator of the minivan 35 years ago, and it was a huge success. The new Pacifica looks to capture some of that magic as the first hybrid minivan that can run on electric power for periods of time cutting the use of gas.

I’ve driven the gas version of the Pacifica, and it’s a very capable people mover with plenty of space for the family. The newest Pacifica, a hybrid, carries along the same route. It just does it with fewer stops for fuel.

I drove the big Chrysler far — nearly 900 miles for my week of driving — and I stopped for gas twice. I averaged about 39 mpg going between gas and electric. It would’ve done better, but I had about 700 miles of highway driving in two big chunks.

My normal commute was an all-electric affair, with the first 32 miles without any gas. I plugged in at night to have another day of electric power. A hybrid usually comes with a smaller engine, but the Pacifica Hybrid is equipped with a V6, so there is adequate power just like the normal gas version.

The Pacifica Hybrid keeps up with traffic, with the gas engine and electric motor working to provide the push when heavy acceleration is needed. The normal transmission from the gas version of the Pacifica has been swapped for shiftless transmission, known as a CVT, that works really well with this hybrid. There is only a bit of drone on hard acceleration.

The Pacifica Hybrid starts at around $40,000, but my Limited model tops out closer to $48,500. While that’s a big amount for a minivan, the interior is upscale and packed with features that make long trips easier. Upfront heated and ventilated leather seats are comfortable enough for long distance cruising. Those in the back are treated with a second row of captain’s chairs that recline. The third row bench seat bottom is a bit firm, but there is space for two adults or three children.

Families with smaller ones are welcome, with anchors in the second and third rows for multiple car seats. The cabin is airy and large. It is helped further by the large panoramic roof that lets in extra light. Hands-free power doors and lift gate make entering and exiting very easy.

The one area where the Pacifica Hybrid falls short of the gas version is the loss of the fold-and-go second row seating, which houses the batteries. My ride came with the Uconnect Theater with wireless streaming and two video screens that can be independent from each other.

You can have apps with several games, like the license plate game, where kids see an out-of-state plate and you can build a map, appropriately called, “Are We There Yet?” It helped pass the seven hours a little easier and the Blu-ray player was easy to use too. The system did lock up once, not allowing the movie to play. I turned the car off and came back after a few minutes and it all worked again.

A minivan isn’t known as a stylish machine, but the Pacifica tries its best to not be a boxy people mover. The front end styling is rounded and interesting for a van. There are a lot of angles and shapes, not commonly associated with the humble minivan. The side view looks much like the usual minivan look, but the rear angled glass and the lower creased body lines add a bit of visual punch.

A large amount of chrome trim on the body and the roof rails add some spice to the dark granite color. The hybrid version stands out a bit more, with a second small door in front of the front door for the charger. Unique 18-inch wheels and some blue badges are the other visual cues that this is not the normal Pacifica.

The Chrysler Pacifica Hybrid is the spacious and efficient minivan that’s proving that the useful van doesn’t have to be plain and boring. With an upscale interior with plenty of space for the family and the ability to run on electric power, the Pacifica Hybrid could attract new buyers to a new, green minivan.