WTOP's Car Guy Mike Parris gets behind the wheel of three of Mazda's crossover offerings. So how do they hold up to the brand's other driver-centric cars?
Listen now to WTOP News WTOP.com | Alexa | Google Home | WTOP App | 103.5 FM
(1/11) 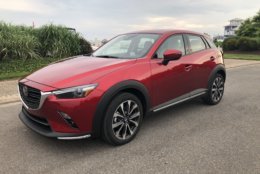 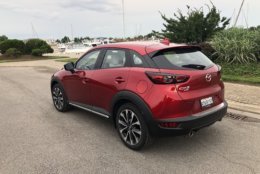 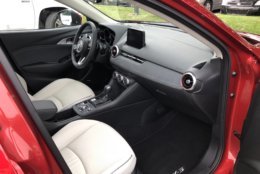 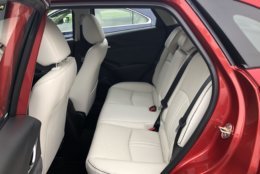 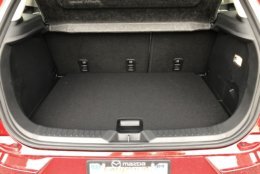 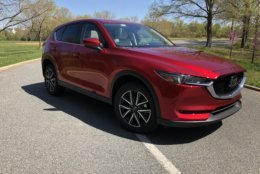 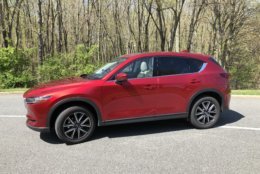 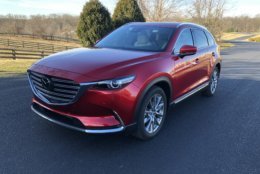 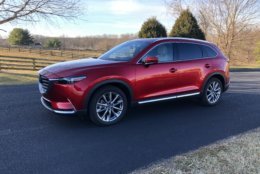 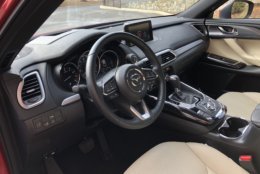 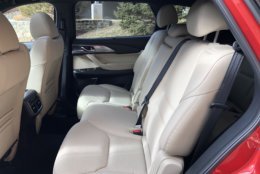 WASHINGTON — I’m sure you remember “Zoom Zoom” and other slogans about Mazda cars from the past. Yes, their cars seem to be geared for those seeking a bit of fun in their compacts, midsize sedan and the MX-5 Miata Roadster. But crossovers are where people are flocking. Does the concept of fun driving apply there too?

Mazda’s latest crossover, the subcompact CX-3, sees a host of improvements in its third model year. In the 2019 model, Mazda really worked to decrease a frequent complaint — cabin noise.

The inside has also been upgraded in the top-of-the-line Grand Touring model with AWD, which comes in at $29,625, about $10 more than the 2018 model. But the improved materials and slick interior are worth that extra 10 spot.

Rich-looking Parchment leather seats adds some flare, but I’m weary of dirt showing with such a light color. Layout of the dash and controls is straight forward and handsome.

Leg room in the back seat is lacking and the lift to the rear cargo area is rather high and there isn’t as much space.

The CX-3 is playful on back roads and 148hp seems to motivate the small crossover better than the competition. The ride is a bit more firm than most but not harsh over bumps, just a bit more German feeling on the road.

Fuel economy for my week of driving was 28.8 mpg of regular, close to the 29 mpg on the sticker. The small size really lends itself to city streets and tight parking spots.

The CX-3 looks like a shrunken version of the larger Mazda crossovers with a handsome exterior styling.

If you need a larger crossover, the compact CX-5 is the next size up with extra space for those riding in the back seat. It also adds more cargo space.

The CX-5 has been given a refresh and it shows on the inside. A more upscale interior awaits once you get inside this Mazda. It moves to a more premium crossover with nifty options on the loaded $34,685 CX-5 Grand Touring AWD like a heated steering wheel and windshield wiper de-ice.

Space inside is very competitive in the class with room for front and rear seat passengers and the cargo area is generous for the compact size.

Outside the CX-5 has seen some upgrades this year including stylish 19-inch wheels that go along with the new front end styling from last year. It’s not a huge departure from before, just a nip and tuck making it smoother and rounded.

Driving the CX-5 is more fun than a compact crossover should be taking a cue from the fun-to-drive attitude that Mazda is famous for. But now it coddles you with less road noise and it takes bumps with less harshness than before.

Power is where the CX-5 isn’t class leading. With 187hp, it feels a bit labored on acceleration with the seats full and AC going.

Fuel economy is pretty good. I managed 27.2 mpg of regular for my week.

Then there’s an even larger Mazda crossover. The Mazda CX-9 offers a third row. There is space for seven, though the third row is better suited for shorter trips or children.

It might not be the largest midsize crossover but it has one of the most upscale interiors for a price under $45,000.

There are comfortable heated and ventilated leather seats up front and heated seats in the second row.

Cargo space is a bit small when compared to some of the competitors in this class.

The exterior styling is modern with a large grill that juts out from the front end. The slender headlight cluster sets back at the edges of the front fascia.

This is still a sizable crossover but it doesn’t look as big as it really is and there isn’t any wasted space. The large 20-inch wheels seem to stretch to the edges of the CX-9.

Driving this CX-9 is a bit surprising for the size as this midsize Ute has some moves in the corners making for — dare I say — a fun-to-drive three row crossover. Taking corners is one thing but the normal driving of the daily commute is impressive, easily taking rough roads without complaint.

The cabin is hushed on the road, one of the better in this crowded class.

Power is from a turbo four-cylinder engine and it feels peppy thanks in part to a healthy 310 ft.-pounds of torque which motivates this ride.

Fuel economy was 21 mpg; a bit under the 23 mpg on the sticker due to more stop than go for my week of driving.

With all these upper trim level crossover models, Mazda has stepped up their technology offerings. The vehicles feature Radar Cruise Control and Smart Brake Control.

The Smart Brake Control, which works at lower speeds, brakes the car when a person darts in front of you and you don’t react quickly enough.

While Mazda might not be as popular as larger car companies, they sure make some very competitive crossovers. Their philosophy of fun to drive has been fortified with technology and dose of luxury for a price that doesn’t break the bank.