WTOP car guy Mike Parris says the new Cadillac XT5 is a luxury crossover with a modern style that commands you take notice, a real luxury interior and the tech that today’s buyers want. See photos.
(1/8) 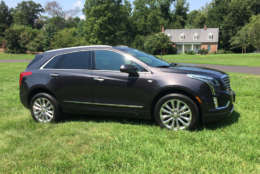 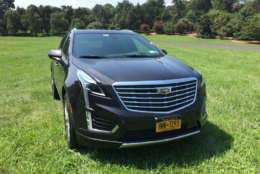 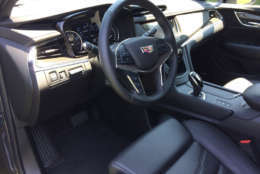 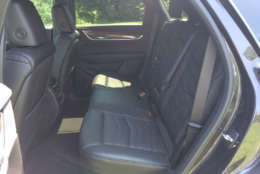 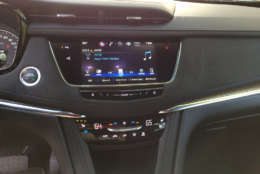 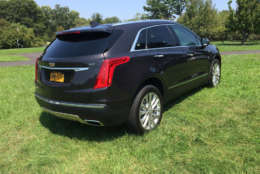 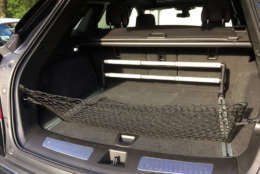 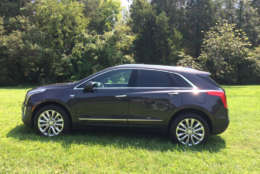 WASHINGTON — Last year Cadillac finally redesigned the venerable SRX compact crossover. It’s the biggest seller for Cadillac, so GM had to get it right.

Its replacement, the new XT5, is a bit bigger than the outgoing model. Prices start around $41,500 for a FWD model or can hit near $66,000 with the top-of-the-line Platinum AWD model, which I drove.

While the luxury crossover market has a lot of competition, Cadillac is trying to make its name stand out in the market. The styling of the new XT5 is a good place to start. The car is a looker with a modern design. You notice the XT5 in a parking lot, just like the Lexus crossover we looked at a few weeks back.

The XT5 Platinum stands boldly with large 20-inch polished wheels. The large grill has the same polished look too. The Cadillac badge also seems to have grown large and wide, so you won’t forget who makes it. The front end is filled with lights — from space-age looking headlight clusters to slender fog lights in the lower portion of the front fascia, this looks like an expensive vehicle.

The new XT5 also has some neat styling on the side of the car with body lines that eschew the normal, bland styling by adding cool shapes. The wheels are pushed to the edges, creating the illusion of a sleek and longer body. The back end of the XT5 isn’t as stylish as the rest of the crossover.

The interior for the top-of-the-line $66,000 Cadillac XT5 is a pleasant surprise. I’m glad to see GM stepping up to compete in the luxury game. A high quality look and feel throughout is a welcome change from the past.

The Platinum trim level comes with semi-aniline leather seats that look as luxurious as they feel. The front seats are heated and also have ventilation. The rear outboard seats are heated as well. There is good space for those up front and the rear is pretty large for a compact crossover.

The interior is so spacious that it seems to rival a larger midsize crossover. If you currently have the old SRX, you will be shocked how much more space this new Cadillac has for only growing slightly.

Drivers have good visibility and there is a heads-up display that’s clear and offers needed information to keep your eyes on the road. The improved CUE system with an 8-inch screen works fast most of the time and while there are no knobs for radio controls, there are now climate control buttons, which is another win.

However, the black trim that surrounds the screen really shows finger prints and smudges and needs frequent cleaning. I tended to use Apple CarPlay, and in the dash, the NAV and 4GLTE hot spot are nice features.

The XT5 drives smoothly even with the large 20-inch wheels, easily taking what the mean streets around here have to offer. The special shocks are always adjusting to the conditions and they work nicely. The car handles well also, not sporty but confident without much leaning or lurching when braking heavily.

For now, there is just a V-6 engine and with 310 horsepower, it moves this Cadillac swiftly and it does so quietly; you really only notice it under heavy acceleration. The eight-speed automatic is smooth but it wants to shift to a higher gear quickly.

This new XT5 weighs a good deal less compared to the old SRX and it pays off with improved fuel economy. I managed 23.2 mpg for my week, better than the 21 mpg the sticker touts, but those aren’t the best numbers in the class by far. The XT5 will run on four cylinders and will turn off at stops to try and seek out better mpg, which can be annoying.

A cool feature on the Platinum model is the rear view mirror. It turns into a monitor with the flip of a switch, which is strange to get used to at first, but it gives you added vision which is always a plus.

The new Cadillac XT5 is a small luxury crossover that’s not very small at all. With a modern style that commands you take notice, a real luxury interior and the tech that today’s buyers want, the Cadillac XT5 looks to boldly lead Cadillac into the future, where crossovers are leading the way.