Kia Optima PHEV: Good for 29 miles before the gas engine kicks in

Car guy Mike Parris says the Kia Optima PHEV is worth a look if you want a midsize sedan but don’t want to spend much time at a gas station.
(1/8) 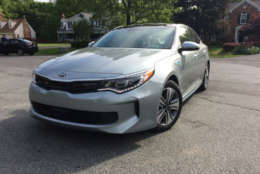 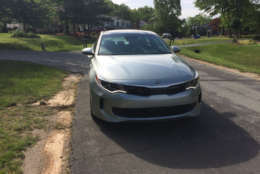 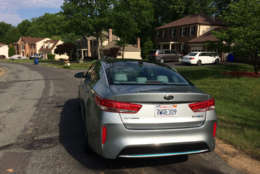 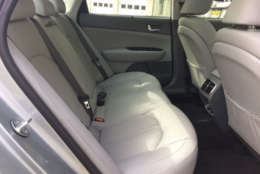 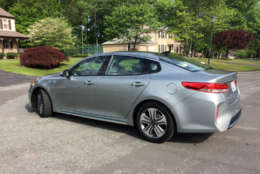 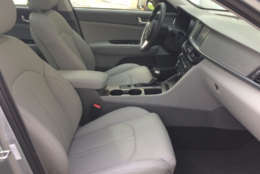 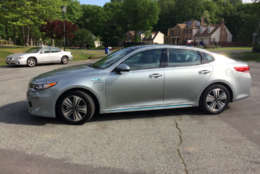 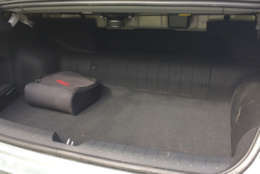 WASHINGTON — Electric cars could very well be the future of motoring, but if you run out of juice you’re stuck waiting for the batteries to charge. While inconvenient, there are ways to combine both batteries and a normal gas engine to extend the range and keep you moving.

This is where the Kia Optima PHEV comes in. It allows nearly 30 miles of electric power before the gas engine kicks in. I drove the Optima PHEV for a week, using just 2.8 gallons of gas in 310 miles and averaging 91.5 mpg. It would have performed better if I hadn’t forgotten to charge the car once overnight. But that’s what makes this set up so good for now; you don’t have to charge the batteries to keep going. Charging time for the battery pack is about three hours if you can charge with 240 volts or about seven hours with a regular outlet like I used.

The Optima PHEV is a quiet cruiser in the electric mode. The instant power of the electric motor makes it somewhat peppy for a midsize sedan. Making frequent stops helps recharge the batteries, extending the range. When the gas engine kicks in, you notice that the Optima PHEV loses some pep, but it gets the job done and you still get nearly 40 mpg with the gas engine. If you have driven a regular Optima sedan, expect about the same ride, though it feels a bit heavier in turns. That’s likely the extra weight of the battery and electric motor.

Kia has made a name for itself by offering great features for a price that’s less than most of the competitors. The same is true of the Optima, but the price of admission is higher for this plug-in hybrid. Prices start around $35,000 and with the pricey technology package it tops out at about $41,300.

The Optima has good space with seating for five, but better serves four adults. Still, I had no problem fitting three kids and their seats. The technology package adds both heat and ventilation to the front seats and heat to the rear seats. A panoramic sunroof brings natural light to the interior. Leather seats and a heated steering wheel are standard. Trunk space is lacking in this class. There is only about 10 to 11 cubic feet of trunk because the batteries are housed between the back seat and trunk. The interior has an upscale look but it’s not very eye catching. The dash controls are placed logically with more knobs and buttons than most cars. There is an 8-inch touchscreen with NAV, and it’s compatible with Android Auto and Apple Carplay and a decent sounding Harmon Kardon premium surround system.

If you look at the styling of some hybrids or even plug-in hybrids, you’ll find they look vastly different from most cars on the road. But the Optima PHEV looks like the normal Optima sedan with a few differences. The front grill is all black instead of the normal chrome. The headlight cluster seems a bit more futuristic in its style. The wheels are a blockier type but they don’t look too strange like some of the other hybrid vehicles. There are two fuel filler doors on the left side. The one up front is for the electric power cord and the one toward the rear is for gas. The rear-end styling is where it departs the most from the Optima with a more squared look and opening below the bumper for aerodynamics. Overall, it’s a better looking plug-in than most hybrids.

If you want a midsize sedan but don’t want spend much time at a gas station, the Kia Optima PHEV is worth a look. With a 29-mile range before you start to use gas, the Optima plug-in hybrid allows you to extend the range without hassle.