WTOP car guy Mike Parris says with an improved interior and exterior, the second generation Cruze matches up nicely with the top of the compact sedan class. Now is the time to get some great savings on a fuel-sipping Cruze Diesel.
Listen now to WTOP News WTOP.com | Alexa | Google Home | WTOP App | 103.5 FM

WASHINGTON — In the past if you wanted maximum fuel economy, it was either a hybrid or diesel and that was Volkswagen’s strength until they were caught cheating.

Since then it’s been mostly gas and hybrids to choose from until Chevrolet brought a diesel version of the Cruze onboard. This is the second year for the redesigned Cruze and it’s the most competitive compact sedan that General Mortors Co. has had in a long time.

The $26,100-Chevrolet Cruze Diesel delivers on fuel economy with numbers that easily beat the Environmental Protection Agency numbers. I managed 46.8 mpg with about 60 percent to 65 percent highway driving better than the 37 mpg number on the sticker. And if I would have tried to drive more efficiently I could have seen 50 mpg or more. 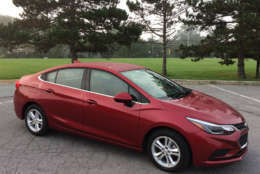 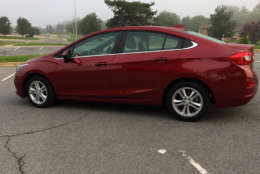 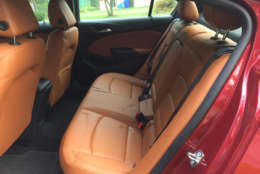 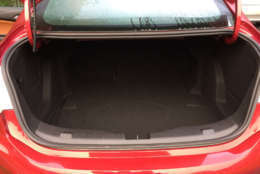 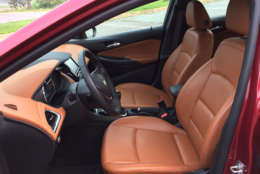 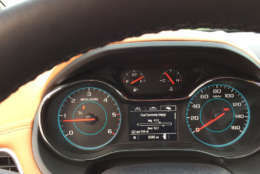 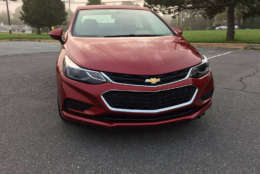 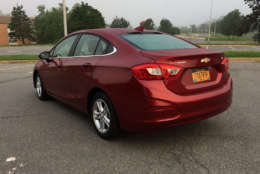 My Cruze came with a manual transmission, which sure helps on the highway. You can choose a nine-speed automatic that’s no slouch either. Power is decent and the torque is very good, especially at lower revs, making the manual very easy to drive. The clutch is light and better than the first generation Cruze that has always made it hard to start off smoothly. The throws are a bit long when going through the box, but it’s an improvement from the past. I noticed how quiet the engine is, even with the windows down; there is just a faint diesel sound.

The Cruze isn’t the sportiest compact on the market but it does surprise you on back roads and soaks most bumps very well. The noise is kept in check on the highway, making it one of the more hushed compacts.

Chevy stepped up the interior with last year’s redesign. The materials are improved but there is still a good amount of hard, but better, looking plastics.

Seats are also improved. I owned the first generation Cruze and the seats were not the most comfortable. The seats on the loaded diesel model are handsome leather, with rich-looking stitching that also carries over on the dash — looking upscale for compact. It features a two-tone brown and black coloring that worked well, even my wife liked it and usually she prefers a single color.

More space for those who ride in the back was needed and the second generation provides enough for most back seat riders. I could finally put in a rear-facing car seat and not have to move my seat up. There was even more space to fit three kid seats with this Cruze, which I couldn’t do with the old model.

The MyLink system that works media and NAV thankfully works better to the touch, not perfect all the time but better. I miss the tune knob but there still is a volume knob. NAV works well and the climate controls are easy and straightforward. Trunk space is pretty large for a compact sedan, but if you need more space Chevrolet also offers the Cruze as a five-door hatchback.

This Cruze has some curves this time around. Gone is the straight up boxier styling of the last model. It now looks as if the exterior has jumped into the 21st century with a more stylish front end. The front fascia is more rounded and it’s bolder than in the past. It’s no way as daring as some other compacts but it’s a safe middle ground without being too dull or off-putting.

There are creases and some interesting shapes along the body of the car and it fits the look of other Chevrolet products. The wheels look a little small for the price of this Cruze Diesel and the design isn’t very appealing to me. You will only find a small badge or two that says TD to give any hint that there’s a difference between a normal gas engine and this more expensive diesel version.

The 2017 Chevrolet Cruze Diesel, now alone in the compact class, is seeking buyers that desire stellar fuel economy. With an improved interior and exterior, the second generation Cruze matches up nicely with the top of the compact sedan class. Now is the time to get some great savings on a fuel sipping Cruze Diesel. It sure surprised me.