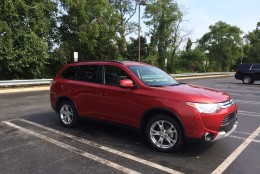 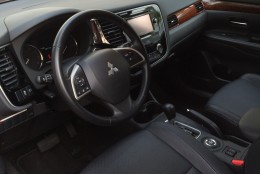 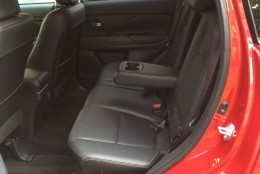 WASHINGTON — If you look at crossovers with seating for seven, the prices aren’t so affordable for families. The 2015 Outlander is relatively inexpensive with just enough space for seven people, although children would be better served sitting in the third row of this quaint crossover.

The current Outlander is being replaced by an updated 2016 version, which could be an even bigger bargain.

While the Outlander still has a surprising amount of room, the interior is starting to show its age compared with other crossovers in its class. The front heated leather seats are a bit firm, but they seem to get more comfortable as the miles go. The materials are average and some are soft to the touch.

The Outlander I driver was less than $30,000 and included leather, woodgrain trim and a 710-watt Rockford Fosgate premium sound system, which classed it up a bit.

The SE model is powered by a 2.4L four-cylinder engine and CVT transmission. If you want, you can step up to GT trim level and get a V6 with a regular automatic. But the best fuel economy is with the four-cylinder and CVT, which drones when you accelerate. It’s fine when you’re cruising along.

I managed 27 miles per gallon during my week of mixed driving, a bit better than the 26 miles per gallon printed on the sticker. The power is adequate for most situations, but once you get four people and some things in the back, the Outlander felt a little slow. The ride is pretty good and it soaks up all but the bigger bumps.

The All-Wheel Control did a good job keeping traction in the heavy rain I encountered. To accommodate the terrain you’re driving in, there are several modes to choose from, though I wouldn’t tackle too much off-roading. The Outlander seems equipped to do some light off-the-beaten-path driving.

The vehicle looks pleasant from the outside. It was toned down a bit a few years ago, which brought the Outlander more in line with other crossovers. Just to look at it, you wouldn’t think it has three rows. The rear end has some chrome trim pieces and clear tail lights, which keeps the Outlander from looking dated.

Overall, the 2015 Outlander SE has good fuel economy. With this being the final year before next year’s redesign, this could be a bargain for those looking for a decent price with a 10-year warranty.

Mike Parris is a member of the Washington Automotive Press Association. The vehicles are provided by Drive Shop, FMI or Event Solutions for the purpose of this review.