About two months after a sign featuring the words "Hey Liberals" in big red letters was taken down in Calvert County, Maryland, a new sign with the same two words has gone up in the same spot. See photos.
Listen now to WTOP News WTOP.com | Alexa | Google Home | WTOP App | 103.5 FM
(1/3) 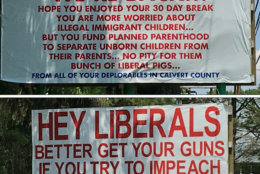 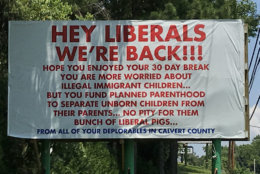 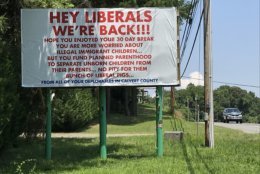 HUNTINGTOWN, Md. — About two months after a sign featuring the words “Hey Liberals” in big red letters was taken down in Calvert County, Maryland, a new sign with the same two words has gone up in the same spot.

“Hey liberals we’re back!!!” it reads, before going on to comment about the controversy over the separation of families at the U.S.-Mexico border. It also includes the words “liberal pigs.”

The sign is posted on a billboard along Maryland Route 4 at Bowie Shop Road in Huntingtown.

Calvert County Sheriff’s Lt. Tim Fridman told WTOP the sign is not threatening in nature and is simply free speech.

“It doesn’t really rise to any action by law enforcement,” Fridman added.

A previous pro-Trump sign had read, “Hey liberals better get your guns if you try to impeach President Trump.” After photos of the sign went viral on social media, the sheriff’s office received complaints about it.

Even though county leaders determined the sign didn’t break any laws, Sheriff Mike Evans said he talked to the individual who put it up and that person agreed to take the sign down.

Fridman said he doesn’t know who paid for the current sign, but it is posted on a private billboard that’s available for anyone to rent. 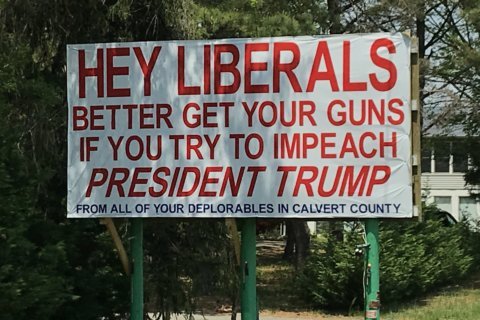