Barn owls have many fans as well as a vital role to play in the ecosystem. In Calvert County, a family of barn owls has taken up residence for the first time in 17 years.
Listen now to WTOP News WTOP.com | Alexa | Google Home | WTOP App | 103.5 FM
(1/5) 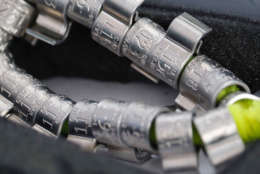 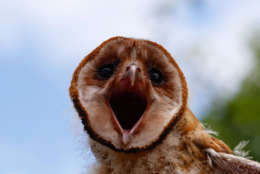 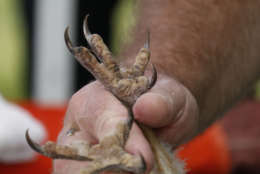 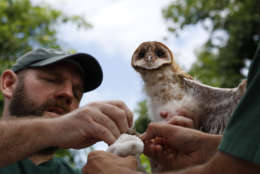 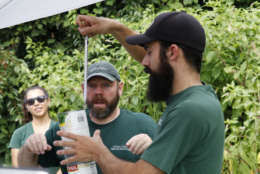 CALVERT COUNTY, Md. — They swallow their food whole, have a raspy scream that can make your blood run cold, and, when pressed, they will eat their siblings.

But barn owls have many fans and they have a vital role to play in the ecosystem. Anyone who has dealt infestations of mice or rats would love to have a barn owl on the job. They are masterful hunters.

They are also in big trouble.

Despite having a global range — they are found all over the world — they are on the decline due to loss of habitat.

“It’s all due to habitat loss,” Brown said.

But when farmers put those fields into production for corn, hay, and beans, Brown says, the open fields where barn owls hunt disappear — and so do the owls.

There’s a bright spot to the story, however.

In Calvert County, where Brown’s department has instituted a nesting program, a family of barn owls took up residence for the first time in 17 years.

Volunteers Karen Anderson and Mike Carpenter, who just happen to be biologists, were assigned the box where the young owls hatched and live.

There were four … now there are just two.

Brown explains that there simply wasn’t enough food for the parents to supply the young, so the two survivors ate their siblings.

Anderson was asked about that.

“We’re both biologists, so we kind of know it could happen, but of course you’re disappointed when it does happen,” she said.

The behavior is not restricted to owls. Other raptors will do the same — to the horror of many observers of wildlife cameras posted at raptor nests around the country.

Saturday morning, Brown led a group of volunteers to the nesting box in Calvert County where the two young birds remain. They were taken out so they could be weighed, banded and have their wingspans measured.

At a table where two empty green bean cans were duct-taped together, Brown spread out supplies for banding and weighing.

The first owlet was silent as it was slipped inside the cans so that it could be restrained while its leg was fitted with a metal band that would identify it and help monitor its habits if and when its recovered.

The second bird, a male, was much more vocal.

As he took the young owl out of a cardboard file box, Brown joked, “Ah, a screamer,” and right on cue, the bird snapped and let out a raspy, angry scream and didn’t let up until slipped into the calming darkness of the can for banding and weighing.

Before he handled them, Brown told the volunteers to keep their voices low.

He worked quickly to reduce stress on the birds.

Brown says the key to bringing barn owls back to their previous numbers.

“The best thing that people can do is to support organizations that preserve land.”

But there’s something else you can do: adopt an owl.

For a donation of $50 you get a photo of your “adopted owl,” you get a year-end nesting summary, and opportunities to observe the banding process up close.

For more information and to adopt an owl visit: http://www.calvertparks.org/Donate-research. 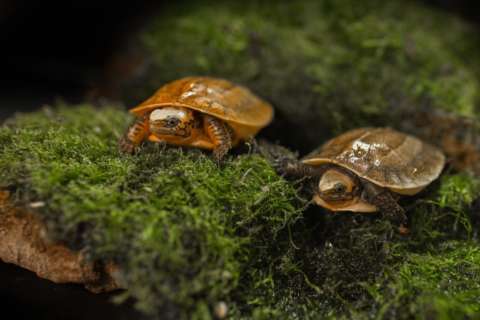