Navy Yard among most ‘apartment crazed’ markets in the country

Navy Yard reigns supreme in D.C. for the sheer number of new apartments that have been developed, and a new ranking puts it near the top nationally for explosive growth.
Listen now to WTOP News WTOP.com | Alexa | Google Home | WTOP App | 103.5 FM

Navy Yard reigns supreme in D.C. for the sheer number of new apartments that have been developed, and a new ranking puts it near the top nationally for explosive growth.

Apartment search site RentCafe looked at data from commercial real estate data and research firm Yardi Matrix to see which neighborhoods have seen the most new apartment construction between 2017 and 2021. In Navy Yard, the total is 4,953 units, not only far outranking other neighborhoods, but also accounting for 22% of all new apartment construction in D.C. in the past five years.

Of Navy Yard, RentCafe says it is “packed with parks, restaurants — and more important construction. With cranes popping up at every single turn, this centrally located riverside area is up for a major skyline change in the next five years.”

No. 3 in D.C. is Near Northeast, which includes NoMa and the H Street Corridor, where 1,981 new units in the last five years account for 9% of new apartments delivered in the city.

For its list, neighborhoods with fewer than 500 units were excluded, and the construction data was compiled for the 50 largest U.S. metros. 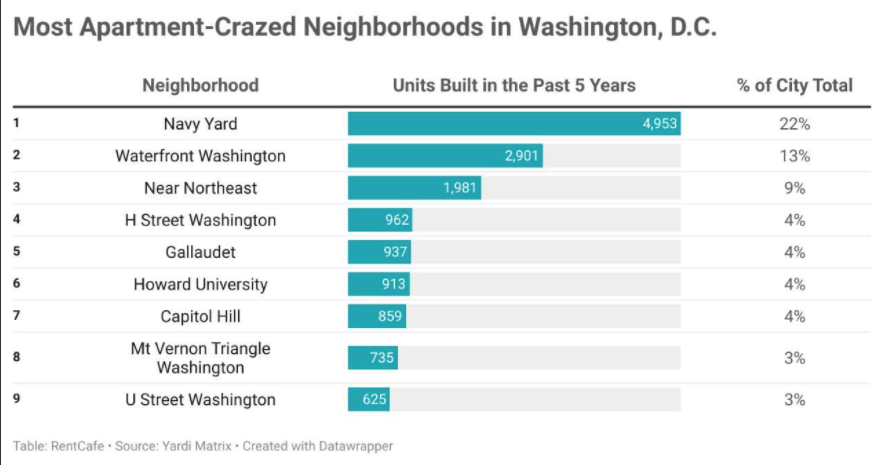