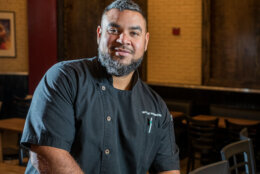 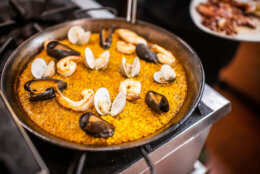 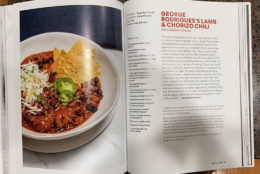 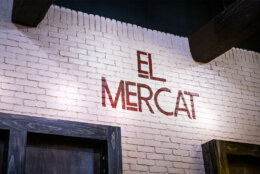 George Rodrigues, a veteran chef whose resume includes working with celebrity chefs Jose Garces and Michael Schlow, and who also appeared on Food Network’s “Beat Bobby Flay” and won, is opening his own restaurant at Rockville Town Center this winter.

Rodrigues said his vision is to “allow guests to savor different dishes that take them through a vibrant Spanish culinary journey with the most exciting flavors of true tapas fare.”

The El Mercat menu is not available yet, though Rodrigues said it will have vegetarian, carne and seafood selections, and four different kinds of paellas.

“My family and I have spent a lot of time in the Rockville Town Center over the years, enjoying the fine restaurants and community areas. Live music activities in the summer and ice skating in the winter. It has always been home to us which is why we chose this location for our first restaurant,” Rodrigues said, who is opening the restaurant with his wife Wanessa Alves.

Rodrigues attended a culinary school in Brazil, and moved to Chicago to work for Jose Garces at Mercat a la Planxa as sous chef, then later in Boston for Michael Schlow at Tico. He eventually opened and ran Schlow’s first D.C. outpost of Tico.

Most recently, he was chef at Boqueria in Penn Quarter.

Rodrigues went head-to-head with Bobby Flay on the popular Food Network show in 2017, and judges liked his version of lamb and chorizo chili with Oaxaca cheese more than Flay’s. Flay’s new cookbook includes Rodrigues’ recipe for the lamb chili.

Rodrigues was also a runner-up on Food Network’s “Chopped” in 2016.

Lee Enterprises try to ward off hostile takeover by Alden