The median price of a house, row house or condo that sold in D.C. in June was $700,000, the highest median selling price for the District on record.

The most expensive neighborhood in D.C., based on June median selling price, was Spring Valley, at $1.465 million. D.C.’s Chevy Chase and Georgetown continue to command seven-figure median selling prices, but the median prices in Petworth and Columbia Heights, one of the least expensive submarkets in Northwest D.C. a decade ago, were well over the median price District wide, at $769,000 and $754,000, respectively.

It remains a buyers’ market in D.C., with the average closing sale price at 102% of list price, and homes citywide sold an average of 15% faster than they did a year earlier.

Young, first-time buyers may not appreciate the impact of record low mortgage interest rates, but real estate professionals do.

“People buy the payment. They don’t buy the price. They don’t necessarily care how much a house costs, but they care about how much it will cost them per month,” said Larry Foster, president of Long & Foster Real Estate.

“You are going to get more money lent to you now, costing you less to pay back than you would when rates were going up,” he added.

Below is a snapshot from Long & Foster’s monthly Market Minute report of sales and prices in the District in June: 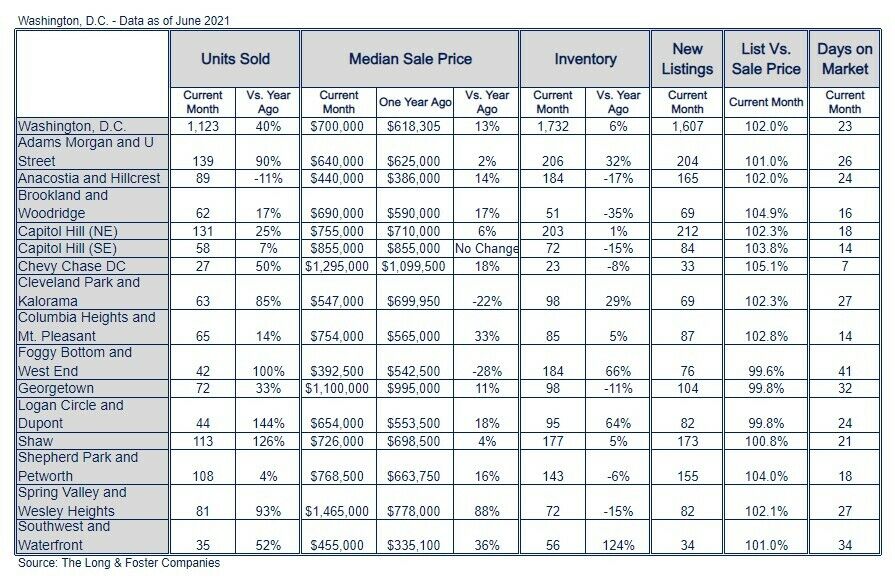