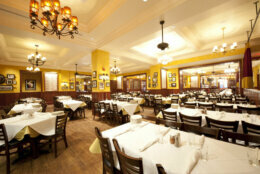 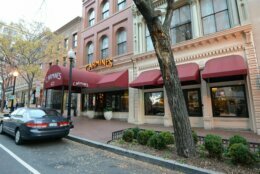 Carmine’s reopens its D.C. restaurant Wednesday, 15 months after closing at the onset of the pandemic.

The 20,000-square-foot restaurant, at 425 7th Street NW near Capital One Arena, seats 750 and has nine private dining rooms with private spaces that can accommodate up to 400 guests, making it the largest restaurant in D.C. It is also one of the top-billing restaurants in D.C. for sales.

Unlike many other restaurants in the D.C. area, Carmine’s chose not be be open for business with capacity restrictions last year, mostly because of its Penn Quarter location, and because of its sheer size.

“The museums weren’t open, the hotel occupancies were extremely low. For us to bring back 150 (employees) with the cost for labor and all that to serve maybe 100 people or 200 people a night wouldn’t have made sense. It would have put us out of business,” said CEO Jeff Bank, who co-owns the Carmine’s restaurants with Alice Cutler, the widow of Carmine’s founder Artie Cutler.

“Also remember, the city was at 25% occupancy, and then it swapped on a dime. For us to hire, retrain and get everything back to going, we can’t just open the next day. It does take time to open a 20,000-square-foot restaurant with 750 seats. It doesn’t happen in a moment,” Bank said.

When the pandemic hit, Carmine’s laid off a total of 1,300 employees, including 150 at its D.C. location. About 70% of employees now restaffed at the Penn Quarter restaurant are original employees that have returned.

On a typical day, Carmine’s in D.C. serves anywhere from 1,200 to 2,800 people. So how do you prepare to reopen such a large restaurant?

“We’ve been here for about two weeks. We’ve been doing cooking and prepping and practicing, and doing roll play with the waiters. Everybody has been dusting off and getting ready,” Bank said.

The original Carmine’s opened in Manhattan’s Upper West Side in 1990. There are now two Carmine’s in New York City, including the still-closed Times Square location — the second-highest grossing restaurant in the U.S. in 2019. Carmine’s also has outposts in Atlantic City, Las Vegas and the Bahamas.

“It’s a great mixture of business, locals and tourists and that’s what we need. Carmine’s is a high-volume restaurant. It’s reasonably priced, but we serve a lot of people. D.C. strikes the right mix. We have to be in a high-volume location,” Bank said.

With such a large staff at its restaurants, many of them servers, Bank also weighed in on the ongoing debate about eliminating server gratuities, and raising wages for waiters and waitresses, and raising menu prices to cover higher labor costs. He favors customer tipping.

“Waiters can get a chance to make a lot of money. Some of our waiters can make anywhere from $60,000 to $85,000 a year. If they were making $20 or $25 an hour without tips, they wouldn’t be making that kind of money. Tips allow people to make a very good living in a flexible shift atmosphere, some of them working less than 40 hours are making that kind of money. I think the tipping model works very well,” Bank said.