The District has released presentations from two separate teams of developers for the redevelopment of the the Frank D. Reeves Municipal Building, known as the Reeves Center, in the heart of the U Street Corridor.
Listen now to WTOP News WTOP.com | Alexa | Google Home | WTOP App | 103.5 FM
(1/2) 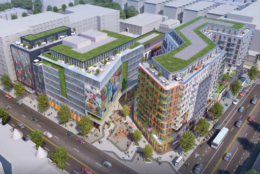 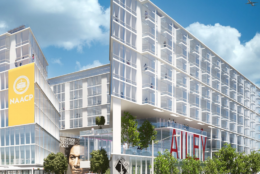 The District has released presentations from two separate teams of developers for the redevelopment of the the Frank D. Reeves Municipal Building, known as the Reeves Center, in the heart of the U Street Corridor.

The redevelopment, at 2000 14th St. NW at U Street, will be the home of the NAACP when it relocates its headquarters from Baltimore to D.C.

The first proposal, from Legacy Community Partners, includes 14 development teams and investors led by Dantes Partners and Menkiti Group, and would include 250 apartments, 46 condos, 100,000 square feet of office space and a 150-room hotel. Retailers would include D.C. Central Kitchen, a food hall and a community partnership with St. Augustine Catholic Church.

The development team says the project would create 4,000 jobs, both permanent and during construction.

The second proposal is from Reeves CMC Venture, a group that includes MRP Realty and Capri Investment Group and CSG Urban Partners. Its proposal includes 110,000 square feet of Class A offices space, half of which would be for the NAACP, 20,000 square feet of retail space, 628 mixed-income apartments, for-sale townhomes, and a 24,000 square foot public plaza and performance venue, a home for The Alvin Ailey School and Washington Jazz Arts Institute.

Reeves CMC Ventures’ proposal would include 100% ownership of its half of the office space by NAACP, as well as NAACP as a part owner of the apartment and retail portions of the project.

D.C. Mayor Muriel Bowser issued requests for proposals for the Reeves Center in December. No date for a final decision on the developer to be chosen has been set, and it’s not known whether other proposals have been submitted.

The city has said it wants to award the project to groups that are 100% minority owned or controlled.