There are three vehicles that are part of The Yards Optimus Ride fleet.

The Yards developer Brookfield Properties is providing the shuttle service for both residents and visitors to The Yards free of charge. Brookfield did not disclose the financial terms of its partnership with Optimus.

The Yards service will also be different from other autonomous shuttle routes. Users with the Opti-Ride app can hail a pickup for ride scheduling and reservations from 12 p.m. to 8 p.m. Monday through Friday with a minimum pickup time of 15 minutes.

The Yards is the first location Optimus Ride is offering the Opti-Ride reservations app.

Autonomous does not mean driverless. The shuttles have safety drivers onboard who can intervene if necessary.

Optimus Ride launched an autonomous shuttle service with six vehicles in Reston, Virginia, at Brookfield’s Halley Rise community in August of 2019, though service there has been temporarily suspended since last spring because of the COVID-19 pandemic. Before that, it completed more than 40,000 passenger trips at Halley Rise.

The Yards service is fully operational right now, with COVID-19 protocols that limit each shuttle to two passengers at a time. The vehicles have been fitted with acrylic seat dividers.

Below is a map of the Optimus The Yards Opti-Ride route (click to enlarge): 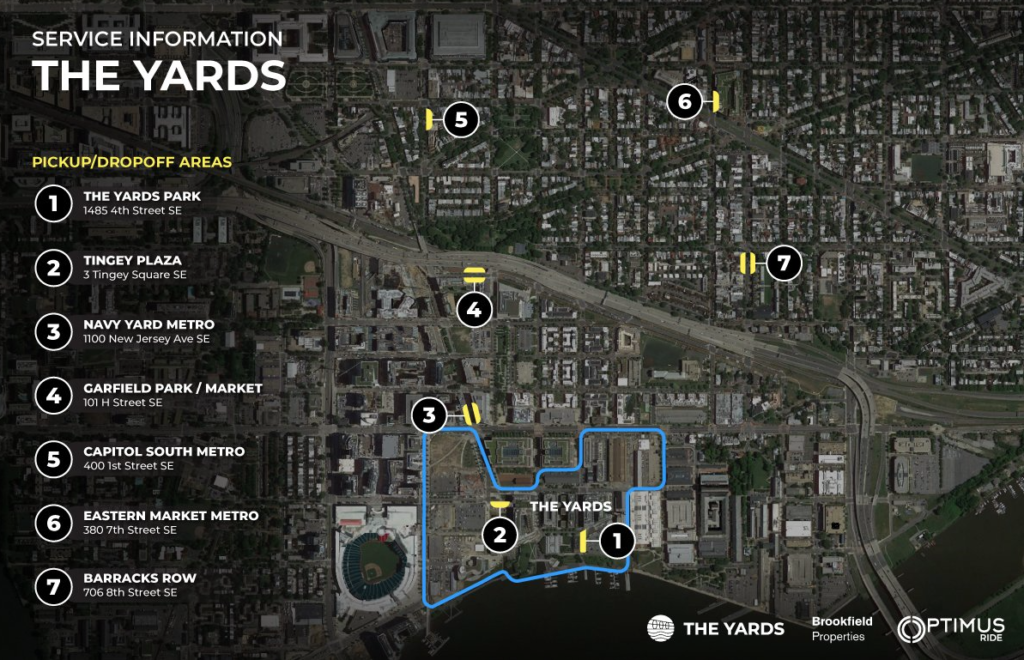