Car-sharing service Free2Move is expanding to Arlington, Virginia, and cites the arrival of Amazon's HQ2 as one of the reasons for doing so. Its cars can now be found in Rosslyn, Crystal City, Pentagon City and areas bordering Reagan National Airport.
Listen now to WTOP News WTOP.com | Alexa | Google Home | WTOP App | 103.5 FM

Car-sharing service Free2Move is expanding to Arlington, Virginia, and cites Amazon’s HQ2 arrival as one of the reasons for doing so.

Free2Move launched its car-sharing service in the District in October, deploying 600 vehicles across all eight wards in D.C.

Its cars can now be found in Rosslyn, Crystal City, Pentagon City and areas bordering Reagan National Airport. The company did not say how many cars it has placed in Arlington County.

“With Amazon’s recent announcement outlining their plans to move 25,000 employees into the Arlington area, Free2Move’s mobility network promises to provide necessary mobility options to a growing populace,” the company said in a statement.

Free2Move competes with Car2Co and Zipcar in the Washington area. It says it has more than 20,000 registered members in the area.

Free2Move is owned by Groupe PSA, the European company that owns the Peugeot, Citreon and Opel car brands, though its fleet here is a mix of Chevrolet Equinox and Chevrolet Cruze vehicles. 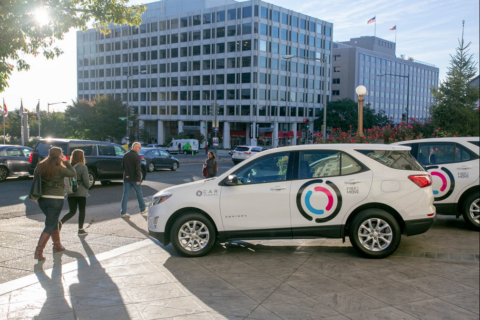